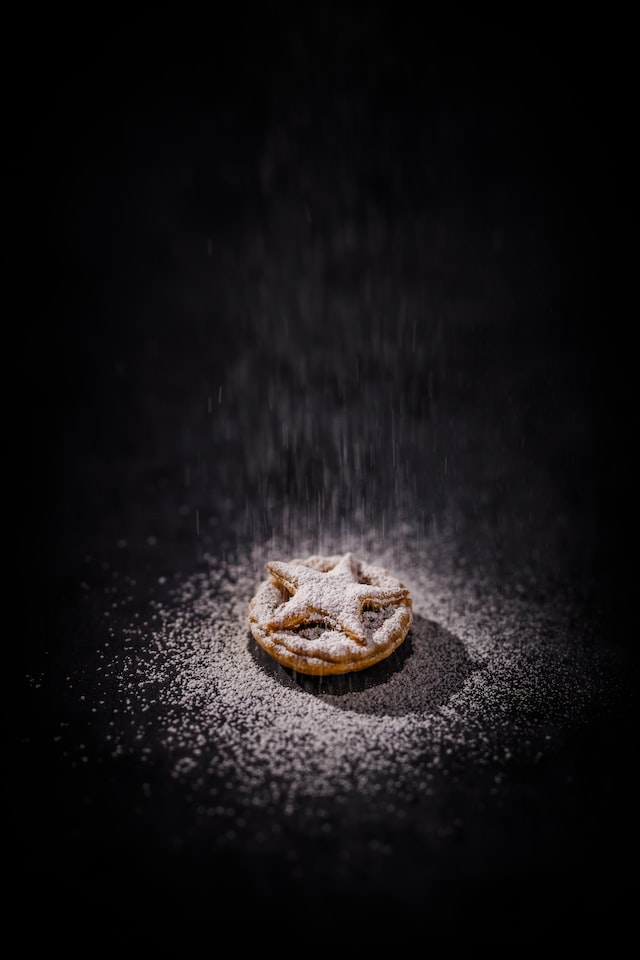 Main image by Rob Wicks on Unsplash. Other photos my own.

Today is my first “me day” in a fat week. I have had eight continuous days, (mostly enjoyable, if also busy), of catering and making, shopping and cooking, organising and preparing, washing and folding, sweeping and wiping, loading and unloading, and even socialising.

But today, I said, more to myself than to anyone else, “No cooking”. Which doesn’t mean that anyone in the house will go hungry. Least of all me. There’s always stuff to eat in the house. Whether I am on my own, or whether crowds descend for days at a time.

There is still Christmas cake. Lots of it.

There are many mince pies (even a new fresh batch) and lashings of brandy butter.

There are just a couple of jars of lemon curd left, but I’ve decided to keep them for myself. The onion chutney and the beetroot & apple chutney have long gone to good homes. One jar of onion chutney didn’t make it past security at Geneva airport. It was confiscated. I hope the security man took it home and is enjoying it with some good cheese. If not, shame on airport “liquids” legislation.

Today has been such a leisurely day, I even went to a daytime showing at the cinema. Daylight when I went in. Daylight when I emerged. The audience size was fully four people, including me. I don’t know if the poor turnout was because of the early time, or because of the film’s topic. I saw “Bones & All”. Definitely disturbing.

Tomorrow, at the same time, I plan to see another film. This one will be “She Said”. I am sure it will be disturbing too. Then I plan to see “The Menu”, which I am actually nervous about watching. Bound to be downright disturbing. But I will take my flask of herbal tea, a Chupa Chups lollipop, my cashmere poncho, and relax into the lazy lusciousness of seeing a film at the cinema during the day. There’s something very decadent about seeing films at the cinema during the day, when the weather is poor, there’s no calling from the mountain tops, and what snow we had has come and gone.

But back to Christmas fare. So many of them firsts, this year.

A first for the Christmas Cake.

A first for the Mince Pies.

A first for the Brandy Butter.

The Lemon Curd I have made for a number of years now. Always a hit.

As are the Chutneys – though never before the Beetroot & Apple one, wholly made with ingredients from the AMAP organic garden up the road.

These foods are so part of Christmas.

Christmas nibbles to have around.

Christmas gifts to give away.

I haven’t always made them. I didn’t usually have time/make the time. But now, it’s what I like to do in the run-up to Christmas.

And each item, each recipe, I associate with someone.

The Mince Pies with my sister-in-law, Alex.

The Brandy Butter with my Granny May.

The Lemon Curd with my mum, Hilary.

And the Chutneys with Todd, a family friend.

There is a story or memory associated with each item.

For the Christmas Cake, and Mike’s mum Grace, the story goes that she would bake her Christmas cake in January. Yes, January. Just after Christmas had passed. (As if she hadn’t already done enough cooking for the masses!) She would then “feed” the cake with brandy or other spirit every couple of weeks or so for the remainder of the year, before marzipan-ing and icing it in time for Christmas. I could never be so organised. I never even bothered to make a Christmas cake. But this year, about 21 days before Christmas day, I made my first one ever. As in not just a standard tea cake or fruit cake (of which I have made many). But a proper Christmas Cake. With full on marzipan and icing.

I decided to make up for lost months by “feeding” it (giving it a drink, more like) every few days, since I didn’t have weeks, let alone months. The marzipan was the hardest part, despite watching “how to” videos on YouTube, and it took two attempts and the ingenuity (and patience) of me and three other people for us to get it in place. It’s big enough to last a year, and given all the booze that has gone into it, it will probably be fresh for a year too.

I am even starting to wonder – perhaps I will make a new one in January. Just to see. But there is an inherent assumption, enormous confidence involved in choosing to bake your Christmas cake in January. Not least that you will see the whole year out. I rarely make such predictions on my life.

Anyway. The cake was good. And I can rest assured that I have made a bona fide Christmas Cake. Here’s to Grace. Living some of your legacy.

Mince pies are all about Alex… (along with salted roasted almonds, which did not get made this year). Another first. Messy fiddly things. I made the mincemeat (so delicious I could eat it by the spoonful), but used store-bought pastry. I don’t know what short crust pastry is in France. What I used (three different types) didn’t work properly, but I still felt I was channelling her. Even though where she lives, in the desert, eating mince pies with brandy butter must feel a tad odd. Thank you for the inspiration, Alex. Mine don’t look as good as yours, but that’s okay.

The Brandy Butter I associate with my Granny May. The one who climbed Mont Blanc in the early 1930s. Pretty much a teetotaller, she did like her Brandy Butter. I think it might have been the only time she had alcohol. At least, I rarely saw her drink any. I don’t have her recipe, and wish I did. But even I cannot go far wrong with butter, icing sugar or sugar and brandy. You’d think. Still, it’s come out lumpy, even if it tastes like the real thing. But thank you, Granny. Here’s to your good health. More legacy living on.

The lemon curd is all my mum. I have her recipe and use it. It seems to get better each year and I don’t know how. This year, my dad and Ben patiently grated the lemons, and Megan made arty jar labels. So along with my mum’s recipe, and my stirring and managing, it was a fully family effort. More legacy.

And the chutneys… I had NO idea that mere mortals could make chutney until Todd gave me a jar of his fig chutney about 15 years ago. I thought you had shop-bought Branston pickle, and that was your lot. But home-made chutney is super simple and mouth-wateringly good. Onion is my favourite. I just wish that a whole kilo of onions made more than just three or four tiny jars, though. It shrinks to not a lot.

So I feel like I have been channelling lots of family and friends this Christmas. And not just dead people, for a change. Grace died in 1993, and Granny May died in 2005. But Alex, Todd and my mum are most definitely alive. Of this world.

As for Christmas Day meal, with the almost too large Turkey, kilos of roast veggies, and amazing Brussels Sprouts (that even people who swear they detest sprouts end up loving), it was a success, even if I say so myself.

Clearly I was channelling Mike too. He gets me through the entirety of Christmas Day, starting with going on a run. Even when I am not “technically” running, I still always go for a run on Christmas Day and New Year’s Day. It’s what Mike and I always did, together. The Christmas Day run just to feel more zen, healthy, fresh, and fit for human consumption. And the New Year’s Day run to get us off to a good footing for the new year.

Practices, rituals I adhere to despite having 6 Christmases now without him.

As always, thank you, Mike. Your legacy lives on too.

And darling Julia. How you are missed. I re-found two passport photos of you from when you were two and three. So precious. So cute. Such an imp.

Where the hell were you, this Christmas? I don’t know why, but I can’t seem to channel you.