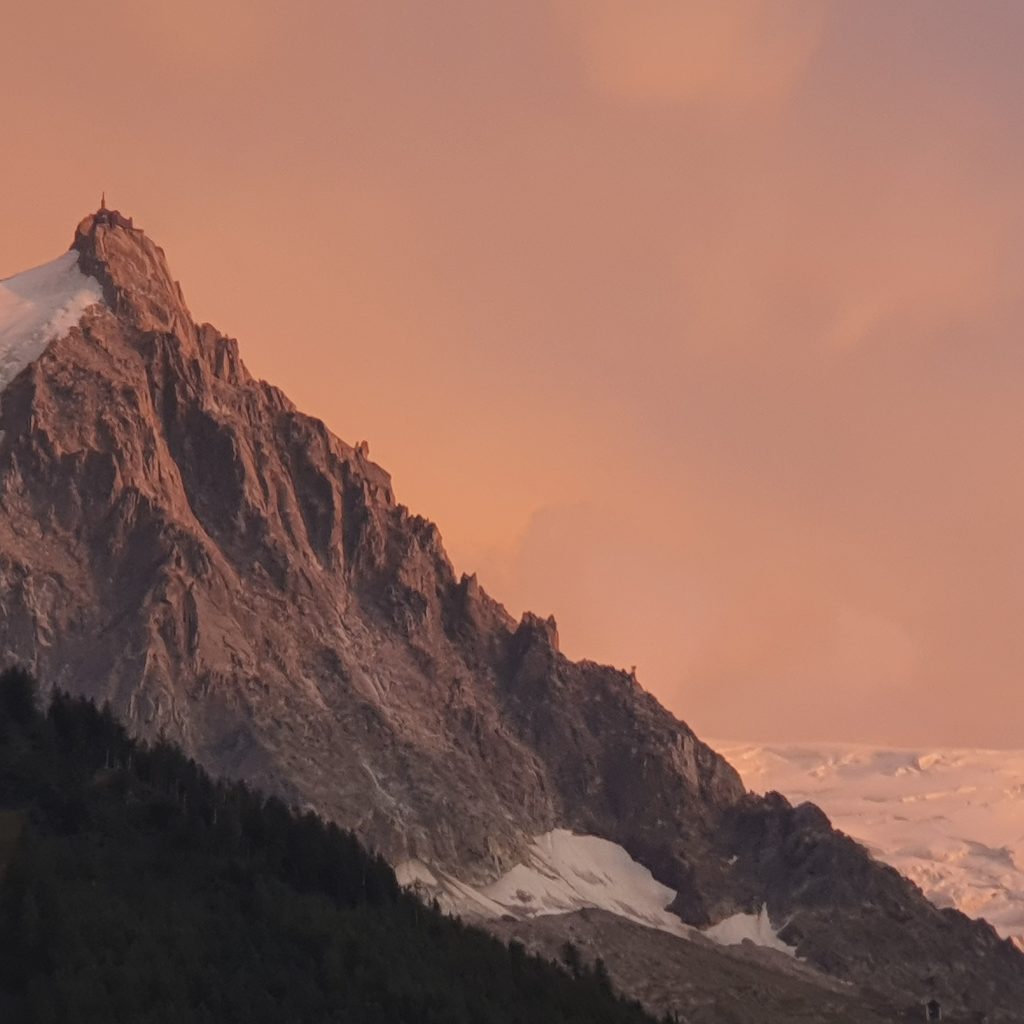 Sunrise over Chamonix after running through the night

Photos my own, taken in Chamonix, France

Early in June this year, I was invited to write piece for “Like the Wind” magazine, founded by my friends Julie & Simon Freeman. Her “ask” was to write something running-related in.connection with the Sun. They wanted to have a series of articles to publish around the Summer Solstice.

We had met Julie and Simon on a train in Switzerland in 2012 when Mike and I were heading (as they were) to the SwissAlpine trail run. Julie has been one of the rare people who has been most skilled and gracious in supporting me these past years, despite not having been a Griefling herself until more recently.

I have a gazillion images in my mind, and photos in my Dropbox, of the sun rising while out in the mountains – but these images relate to walks, or the occasional “proper climb”. I have got up at 4h00 and 5h00 – even earlier – in myriad mountain huts, to make an early start. And I have seen the warm, pink glow of our beautiful sun inch its way across snowy and rocky peaks above valleys opposite, or high above me. Tantalising. Out of reach. Encouraging. Beckoning. “Keep going, Emma. It will be worth it”, I imagine her whispering.

But for runs? I haven’t been that kind of runner. My legs grew strong with Orienteering, which was almost invariably in the daytime. And short, especially if held at night-time. I’ve had 7h00 or 8h00 starts for longer summer trail runs, but it’s broad daylight by then.

Then my image, my memory, lands. Not so much while running, but just afterwards. About 6h45, one late August morning, in 2005, just after finishing my one and only CCC event (Courmayeur, Champex, Chamonix). Mike and I had three young kids at the time, and to do something like this involved enormous organisation and preparation. We knew it was “now or never”. We were fit. We had trained. We had even summitted the Mont Blanc earlier that summer. In one day. No sunrise on the top for us!

The sun set while we were savouring salty chicken bouillon and pasta in the “ravitaillement” tent in Champex. We had already been going for 9 hours since Courmayeur. Already tired yet only about half way through. Mike and I headed out into the night, into the woods (darker still), and carried on. Up, down, along, up, down, along. It was a long night. 9 hours of darkness. At last, the final stretch. Slowly and gently downhill now, from Argentière into Chamonix (not via Flegère, in those days – thank goodness). The end in sight, at least in our imagination – even if still a couple of hours away. Soles of my feet so tender, that I sensed each twig, every piece of gravel, on the muddy track.

And finally, after 18 hours and thirty-something minutes, we arrived. Together. Holding hands as we wobbled in. Not so many of us finishing then, though we still had over two hours grace before our race closed.

What now? Not ready just to head back to our rented chalet to relieve my parents who’d been looking after our young kids. Exhausted physically, but amped up emotionally, spiritually and mentally. Lingering in the moment, soaking up the feeling of accomplishment, of partnership, not just during all our training, but also the 18+ hour run, and the long night we had just experienced together.

And then the warm glow of the sun, reaching out to kiss and embrace the peaks high above us. Slowly, tentatively at first. Pink hues, barely perceptible. Flowing gently but steadily now, down the steep and rocky summits, as if a giant were peeling back an enormous tarpaulin. Watching this unfold. Mesmerised. Our sun. Our mountains. Our planet. The warmth of the sun filling our hearts and souls so fully we couldn’t tear ourselves away if we’d tried. Faster and faster now, the sun’s rays gained in confidence, extending out, encompassing everything within reach. The giant’s tarpaulin suddenly yanked down as if a simple sheet.

Another beautiful day rising in the Chamonix valley. But first, a long soak in the bath, and a couple of hours in bed.

And thank you, Mike. May you be running, lightly, nimbly, with the sunbeams across our heavenly kingdom.