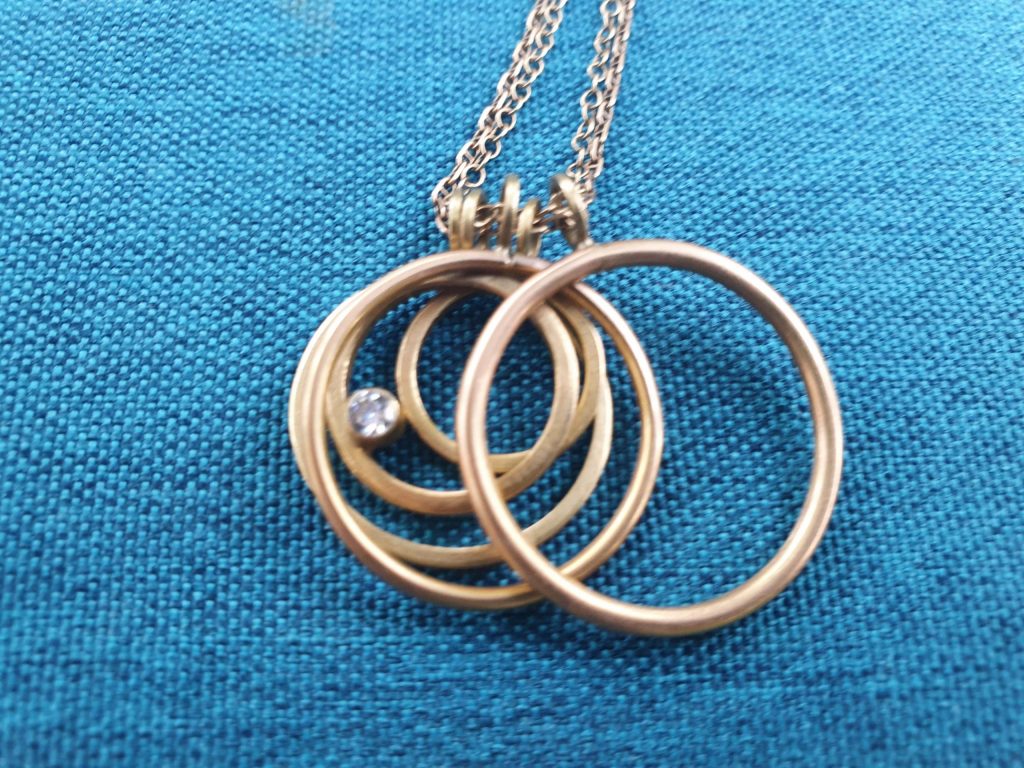 Photo my own. Our wedding rings turned into this necklace by jeweller Heather McDermott on the Isle of Skye

Something I noodle over from time to time, is the weirdness of the word “ex-“ when prefixed to another word. Like “ex-boyfriend” or “ex-lover” or “ex-wife”.  The “ex-“ invariably means “alive”, and not dead at all.

But sometimes, “ex-“ means well and truly dead. Anyone with a modicum of British culture (and more than a few decades on them) will know that “ex-parrot” most definitely refers to a dead parrot. I had to include that. The Monty Python Parrot Sketch was one of Mike’s many favourites, and he would quote it often and verbatim.  https://www.youtube.com/watch?v=vZw35VUBdzo.

And sometimes you don’t need the prefix at all. You know that the person or animal is dead.

So why is it that we use “ex-“ for people who are alive?

Medjool is recently divorced, in the timeframe that we have known each other. And it seems that he’s slipped more effortlessly than I have into referring to his former wife as “ex-wife”. I call her his “wife”, out of habit. Because for the first 15+ months of our relationship, she was his wife. Because she was his wife for over 25 years, and it has only been 9 months that they have been divorced. I might refer to her as “your wife”, (for example if we are in company and I clarify who we are talking about to someone else). If I do, he likes to correct me. “She’s my ex-wife, not my wife”. Perhaps because “wife” now feels wrong when referencing her. He’ll correct me both when it’s just the two of us, as well as when we are in company. I don’t think it annoys him. It just doesn’t feel right to him.

But the shift to “ex-wife” can’t have been easy, can it?

Though I have noticed that I have started to use a new form of grammar when talking about him. Sometimes the verb I use, following his name, gives his current lack of breathing-ness away.  I am using the past tense more now. And it’s hard. I have noticed that shift. A new pattern of verbs that clarify Mike’s lack of aliveness, even if he is still “my husband Mike”.

These are some of the many weird things about language post death, language post life. A subtle but important distinction between death and divorce.

And yet, I am grateful that Mike is not my “ex-husband”. That feels almost as wrong – probably more so – than him no longer being alive.

For dead or alive, he is Mike, my husband. And there, I notice, the present tense pulled out strongly in front.