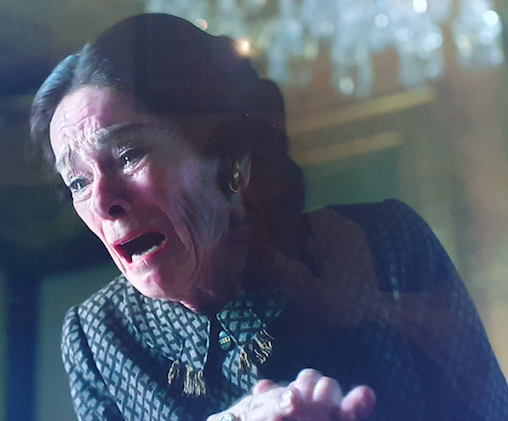 Images of Geraldine Chaplin from “The Crown” taken by myself

I continue to watch “The Crown”, at the rate of one or two episodes a week. I started in January and perhaps I will have finished all four series by the end of April if curfews would kindly stay in place. Every so often after an episode I will go and check on whether the scenes depicted in the series really did happen. Most of the time there seems to be good evidence, even though I am sure extra spices are added for the sake of viewers’ titillation.

One of the truisms of Love and Grief, I believe, is that it’s only the person experiencing the Love and/or Grief who has any idea of what it’s like. What it’s really like. Even with solid self-esteem, exceptional vocabulary, and access to emotions, how can these complex blends of emotions be shown, described to another?

In my experience, when I am touched by someone else’s demonstrations of Love or Grief, it is not theirs that I am touching into. It is my own. My sense is that we can only have our own experience, and, try as we might to explain/describe/convey it, the best we can do is touch into the other’s own experience of similar emotions. I don’t think, for a minute, that when I have cried at films and books it’s because I felt the actor’s or writer’s own Grief or Love, but that I felt my own. Because we have enough of our own, and because we can’t get inside another person’s body. Even the research around mirror neurons doesn’t suggest we feel another person’s feelings. We just read them, and then feel into our own.

It has been a pretty Grief-intense week – both at a personal level and at a community level. On Thursday night I co-facilitated a session led by Frank Ostaseski for La Maison de Tara volunteers and local palliative care professionals on the topic, “Grief as a Path to Wholeness”; then on Friday night I helped with some of the technical aspects of Medjool’s mother’s funeral service/celebration of life on Zoom, almost a year after she died.

And quite aside from all of that, it’s March. And March is the month Mike seriously spiralled four years ago. The month he felt, one morning, that he was having a heart attack, and the local emergency response came tramping through the house. The month we took him into hospice. The month during which I have my birthday – my 50th back then, and last with him. I am not only about to have my fourth birthday without him, but I turn an age he never reached. 54. March is the month in which Julia was born and in which this year she will not have her 17th birthday. And then there is April with its other hard dates. And May. And June. And July. And so on. But March feels so very tough.

My heart feels crushed, crumpled, heavy. It hurts. It actually hurts. If I wasn’t grieving, I would think I had heart trouble. I did once go to see my doctor, abut 18 months ago, some months after Julia died, because I was, honestly, scared I had had a heart attack. He hooked me up to monitors and afterwards simply said, “Emma, your heart is working fine, and your heart is broken”. That felt like a true truth then, and it feels like a true truth today.

I was trying to come up with an image of the weight and sense of my heart, and yesterday and today it would be that it feels like a kind of partially-set brick still dripping wet concrete, pulling down my head, neck, shoulders, heart and belly. It’s heavy. I feel like I sag under the weight of it.

But back to The Crown, and one of the Love-Grief depictions that I feel the producers (and in this case, actor Geraldine Chaplin) got so right. She plays Wallis Simpson in the third series, and as her husband Edward VIII, the king who abdicated for love, nears the end of his life, taking his final breaths, Wallis is sitting by his bedside.

It’s a slow scene, done horribly brilliantly. Each breath taking the time it takes. Wallis’s hands wringing. Her eyes filling with fat tears that go nowhere. Her mouth and face contorting slowly but surely into the crumpled and crushed features of someone whose sweet love has taken their final breath. The passing from “knowing that he was going to die” (and perhaps even accepting that), to the devastation of the realisation that it’s now happened, and life truly will never be the same again.

Her mouth.
Her face.
Her eyes.
Her pain.
The contortions of a face in deep shock and grief.

We don’t get to see those faces much in others. I don’t. Only my own.

It’s what Geraldine Chaplin’s did.