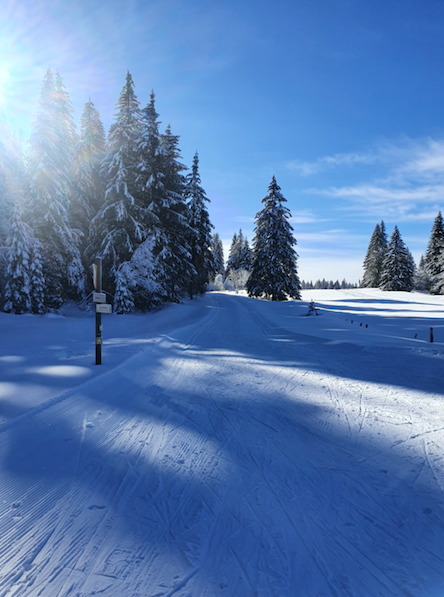 A Wave of Fresh Green Grief Amidst the Snowy Whiteness

Yesterday was a gloriously sunny day, brilliant and bright and fresh and sparkling after the recent snowfalls. Medjool and I had already decided that we would head up into the Jura for a cross-country ski. He knows the region better than I do and so selected where we went. A place that was new-to-me for cross-country skiing purposes. Took a long time to get there because a gazillion others inexplicably also had the brilliant idea of heading into the winter wonderland. But once we got to our destination, most people had turned off along the way, and it was comparatively quiet.

It was stunning. Truly magical. I don’t feel particularly fit at the moment (too much COVID confinements, too much sitting at a laptop, not enough running around airports, train stations, hotels or cities. Not to mention early morning 3,500 m swims). But I still enjoy it at my own pace. It’s quiet. I see Medjool when he loops back around, and the odd person or three overtakes me. But otherwise, all is stillness.

I love the Jura. It feels like home. So full of memories. Some wintry. Some summery. Some very recent in that I have made them since Medjool entered my life. Yet others recent but made alone in the months after Mike died when I just had to be out for long walks accompanied by no-one other than my dog. And some I made with Mike on long runs.

And so it was, probably about 8 or 9 kms into our ski yesterday that I was skiing along a little more easily, it being only gently rising rather than brutally rising. And as I looked around I stopped short in my stride.

I know this place. I recognise this place. I have been here before. Not in the winter, not in the snow. But in the summer. Not skiing but running. Gently jogging. I could see the brilliant green, the little wooden fences. I could smell summer smells and hear summer sounds. Most of all I could picture myself in the TransJu’Trail, a 36 km mountain trail event that I did with Mike twice, and my dad once.

I had to stop. Overwhelmed by memories. Not just that moment in time coming back, which had been gleeful and joyous – “At last! A relatively easy bit to run – as opposed to walk. Gently uphill but barely, and finally feeling that I am getting somewhere. Able to start covering some ground”. Seeing, in my mind’s eye, other runners in front of me. Trailing off into the distant woodland. Visualising where I was in the event at that point – perhaps only 6-8 km in on a long race, so lots more to do, but feeling easy.

And picturing Mike, way out ahead of me, no doubt also enjoying the smells and sounds. Always that bit faster than me that for an event like that he’d finish a good hour in front. Remembering the evening before where we’d snuck away from home to stay in a small hotel, eating something tasty and salty (I seem to remember steak et frites). Enjoying my dad’s company. He was doing his first ever long mountain trail run – the eldest ever to participate in that race, aged 77 at the time, and was interviewed at the end when he came in.

The timing of that whole period so full of poignant memories. June 2015. That summer no longer so innocent about life. Edward about to have his second brain operation from which he became paralysed on one side. That summer when I last saw Don at the end of August in Mallorca, some 10 days before he died. That summer when I didn’t do the OCC event in Chamonix so I could accompany my sister-in-law as she explained to her daughters just how very ill their dad now was. That summer when things felt tense but still manageable. And by golly did they get much less manageable after that last innocent-ish summer.

All those memories in that moment on the cross-country ski track. I cried, sobbed and remembered Mike. The feeling of having been there with him. The sadness and grief at so much lost, so many important people, since I had last been there. So many shocking happenings in such a short timeframe. Incomprehension – still – at how I got from there, on those early summer tracks, with Don, Ed, Mike and Julia still in my life – nonchalantly jogging along a forest path in the Jura – to today, sparkly wintry crisp and clear, without any of them. Yet fortunately with another, equally beautiful, man in my life.

My tears eventually dried up. Sobs lessened. Medjool’s arms around me. Breathing in the moment. Grateful I was witnessed, accompanied with that memory, rather than being left to be with it all on my own.