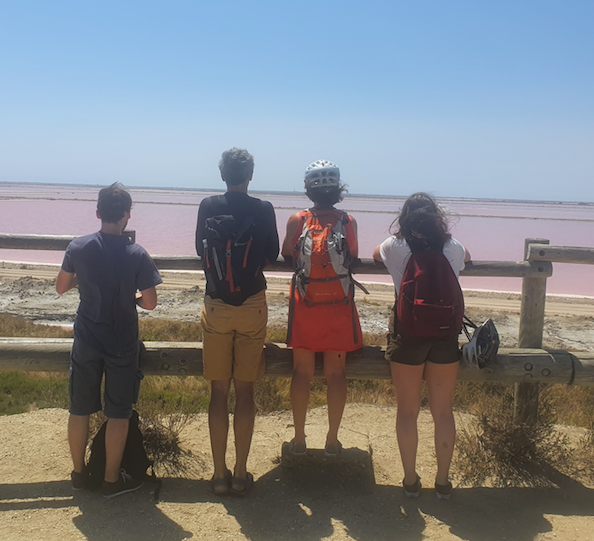 Picture from August 2020 in Camargue

There has been a recurring question asked of me these past 18 months or so, which is both the time since Julia died, and also the time since I have (formally) been in a relationship. Oddly the question is not about Julia, nor about how I am (those are topics where most mere mortals fear to tread). Instead the question is about how my surviving kids feel about Medjool. People have asked, “And what do Ben & Megan think about Medjool/you being in a new relationship…?”

And it’s a question to which I haven’t had an answer, at least not with their own words.

Up until now, when people have asked me, I have said, “Well, I don’t really know because I haven’t asked them”. And I haven’t asked them because the question feels weird, puts them on the spot (I mean really – what are they supposed to say in answer to that kind of question?), and feels potentially awkward on all sides.

But it has been a little longer now, and Medjool came to spend the best part of a week with us at Christmas, overlapping at least 50% with Megan’s own trip (it was important for me that that was okay for her and didn’t feel like an invasion of her home space). So a day or so after Megan got home, and well before Medjool came over, I said to her, “you know, Megan, sometimes people ask me what you and Ben think of Medjool, and I don’t really know what to say because I haven’t ever asked you directly. What I say is that I think you both are mature enough to be happy for me and that it might even remove some potential worry and guilt about mum being alone while we are away at university”.

She looked at me directly and said, “Mum, your personal life is your personal life and so you can do what you want with it. All I care about is how he treats you, based on what you say and what I see myself, and how he treats me. And all of that is more than good”. It was said quite calmly and matter-of-factly, yet also warmly. Interested but not invested. Caring but not emotionally attached. Vigilant but not wary.

Last night, after Medjool had left after being here for most of the week, I asked the question of Ben, in more or less the same way. He spoke more directly, succinctly and firmly even than Megan. He said, “Mum – two things. Number one, I am really happy for you. And number two, I really like him”. There were tears in his eyes as he looked at me and held my gaze, and my own tears came too.

I feel such pride, relief, warmth, love and ease at hearing both of their responses. Their acceptance of Medjool means a lot to me, as I know it does to him if he wants to hang out here, especially when they are home. He is intensely aware of this being our family space and their place of respite. I have long been aware that only five people’s views of Medjool mattered to me, two of whom are Ben and Megan (the others being Mike’s surviving sisters, and his best friend, Clive – and they don’t know Medjool well enough yet for me to ask them). But it was high time I knew Ben & Megan’s views.

It has surprised me how important, how soothing it has been to hear such glowing approval from them. Not because I need their approval, but because I want them to feel relaxed when they are here, and relaxed about how I am when they are not here.

It’s so hard though, not having Julia here too to ask. I know that she was not ready for the whole dating thing. I had met Medjool before she died but nothing was official until just a few weeks before her death, and I had decided to tell all three kids together, on 5th July 2019, when we would be together in Munich for the Elton John concert. The kids would not be together before then, and I knew them well enough to know that there was no point in telling them separately if they were to hear it from me, face to face, which was what I wanted. I wasn’t delaying telling them. It was just the time of year and them not being back from school or university.

But Julia died on 30th June and never made it to Munich. She didn’t want me to start dating, and I don’t know if that was about her feeling it would be disloyal to Mike, or me being less available. I know though that a non-depressed Julia would have come around very quickly to Medjool. I know that he might even have become a valued, if not father-figure, then at least adult male figure in her life. I think too that she would have got on with one of Medjool’s daughters well, in time, despite the age gap. The ache of missing and wishing will be there always.

I am so proud of Ben and Megan’s responses. Their maturity, their wisdom, their sense of self-assurance with themselves, but also with regards to their relationship with me, and even Medjool. Yes, they are older and wiser and some years have now passed since Mike died. They miss their dad. Of course they do. But I think they realise that love and relationships and building new threads in one’s life carries on. They are also dabbling in their own romantic relationships, so have some sense perhaps about the importance of love and affection in one’s life.

2 thoughts on “Wise and Kind Babes”