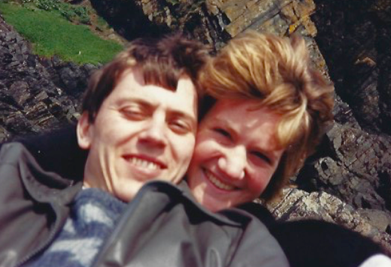 Main photo a “selfie” with a traditional camera, Easter 1988, our first weekend away, in Cornwall, some 6 months after the start of our relationship.

To want to have sex, love-making, and intimacy (deep intimacy) in my life again was not a difficult decision for me to make when Mike was no longer breathing.

Unlike many of my widowed buddies who could not, cannot, or will not imagine having sex and intimate love with another man/woman post loss, I knew deep in my bones and heart and elsewhere in my body’s organs that I wanted and desired the opportunity to love and to be loved, fully and intimately and sexually, again in this lifetime.

At just 50 and a matter of days when Mike died, I felt young enough to know that, in time, I was going to do everything possible to enjoy that kind of intimacy, that kind of deep relationship again.

I didn’t need or want a relationship right away, nor any time during the first 18 months afterwards, though by golly I missed intimacy and sex. I knew I didn’t want intimacy with another human being, apart from myself or Mike at that stage. And truthfully, even at 18 months, I wasn’t thinking about it. It felt “too soon”. But I was prompted to curiosity somewhere around 18 months after Mike died, when I attended the Soaring Spirits Conference for Widows in Toronto in November 2018. There I attended two workshops on “dating post-loss” and the ball was set in motion.

One workshop was offered by two “still young” widows, widowed by the 9/11 atrocities – by then 17 years ago, and so highly capable of expressing some perspective of life and love post loss. I guess that they were both in their late 20s or perhaps early 30s when widowed. The other workshop was offered by a gorgeous sexy and vivacious woman who was perhaps in her early 60s, and felt targeted more at the “post a long-term, stable relationship” widow. Like me.

Online dating then. Ugh. I resisted like hell at first. I came back and bravely said to some friends, “um… so… I think that soon I might possibly perhaps maybe be ready to start potentially meeting some nice chappies with um a view to um who knows, but perhaps having a relationship. Do you know anyone who knows anyone who knows anyone who might be um, nice, divorced or widowed, mentally and emotionally stable, self-aware, fit? Oh, and about my age”.

No-one knew anyone. One close friend said, “Actually yes. I know a lovely divorced man in my village. His wife left him 18 months ago. Truthfully, he’s a mess. But I think he’s nice. Do you want me to get you his details?” I decided that even if he were “a mess” I might be interested in meeting him. Turned out that my friend didn’t know him well enough to have his contact details, so I had to work through another mutual acquaintance, a woman who asked me lots of challenging questions and clearly wanted me to call her so she could give me “lots of context” on her friend before I called him because she felt it wasn’t appropriate for me not to know something about him.

Being someone who prefers to make my own decisions about people rather than hearing someone else’s view point, I decided that this man was probably a lost cause, at least for me. I hope that, two years on, he is less messy.

I even bravely propositioned my charming and objectively good-looking therapist who firmly and confidently and professionally and carefully told me “No and more No, and by the way, the attraction isn’t there, and anyway, No. And by the way, No also to any kind of social contact once we are no longer working together. No”. (My ego took a hit, and I learned more about holding boundaries in that conversation than perhaps in any other conversation ever).

So my network, wide as it is in some ways, was useless at coming up with the name of one healthy male about my age who was eligible for prospective dating. I began to lower my standards, and asked, “Do you know anyone? Just anyone?” I was thinking that at least I could “get some practice” at meeting people and doing this dating thing, and perhaps avoid the on-line rigmarole. But still no-one seemed to come to my friends’ minds.

So on-line dating it was. Five dating sites yielded just one real prospect, Medjool, who has been a core part of my life since then. It’s been lovely. And lucky. Truly wonderful and I am grateful for finding someone so special so easily, (and tangentially, not having to go through the horrors of what most people seem to experience in the dating game).

But back to love-making. It’s been easy and natural with Medjool. Of course, we’ve had to get used to one another’s bodies as well as our myriad preferences and predilections, but in the main it’s been plain sailing.

So easy, so relaxed, so natural, in fact, that more than a few times I have been close to saying Mike’s name instead of Medjool’s. I was never of the school that learns to never say one’s lover’s name in case the wrong one pops out. I have always loved being “Oh Emma’d” during love-making, rather than “oh honey-ed” or “oh babe-d”. Something about being present with the person you are with, I assume. Or just old-fashioned monogamy. I don’t know.

And so it was the other day. I came, and as the whole of me relaxed, Mike’s name was on the tip of my tongue. But not as Mike. As Micky.

I melted into deep sobs and love-making was over, at least from a sexual point of view. Obviously. And I blubbered to Medjool, “I nearly said Micky. Micky is Mike”.

When I first met Mike, he was introduced to me by my brother James and his best friend Clive. They said, “This is Micky”. Sometimes they called him “Mick”. But never Mike. As I met Mike’s parents and his three sisters, he was Mick or Micky depending on context.

Over the next years, as I met more of his friends and he met mine, I noticed that Mike introduced himself as Mike, and that that was the name his newer friends called him. One day I asked him, “So – do you prefer Mick, Micky or Mike?” “Whatever you prefer” was his answer. (A 9 on the Enneagram, I am sure).

Not content with that, I asked again – “No really – what do YOU prefer? I notice that it’s the more recent people in your life who call you Mike, and the people from years and decades gone by who call you Mick or Micky. What do you prefer now?” “Erm – well, actually, I much prefer Mike”.

So I switched. On a dime. From one moment to the next (if my memory serves me well) I went from calling him Mick or Micky, to calling him Mike. I even had to tell various people with much longer histories with him than I had that, “Actually, he would like to be called Mike”.

So it was utterly bizarre that I nearly said “Micky” the other night. It must be 30 years since I last called Mike “Micky”. I don’t know where it came from, other than that I was so very relaxed, and am still aware of the relative newness of this relationship with Medjool. Maybe I was cast back to the early months and years of love-making with Micky/Mick.

There’s a lot of Mike/Micky/Mick in me – in who I am, in my life, in my heart. Not to mention my house and especially my bedroom. It’s only been 18 months with Medjool, and I had 29 years and 6 months of intimacy with Mike/Micky/Mick. That’s 20 times longer than I have had with Medjool.

I know it’s normal that Mike/Micky/Mick lives in my body and heart still. I know that it’s okay if he is with me at all times, even during love-making. And I am grateful that I can talk to Medjool about it in the immediate aftermath as I dissolve into weeping and sobbing.

I am grateful for Medjool’s emotional stability, deep compassion and personal resilience. His deep confidence and solid awareness of his place in my life. And particularly, his lack of jealousy at my loving a dead man. (It was one of the first conversations we had).

I know deeply how simple it is to love, to profoundly love and want, two men at the same time.  And knowing I can only have one of them doesn’t make the first go away.

It will always be “First Mike”, “and Medjool Second”.

Not second best. Not ranked. Not rated.

Just second in time and space.