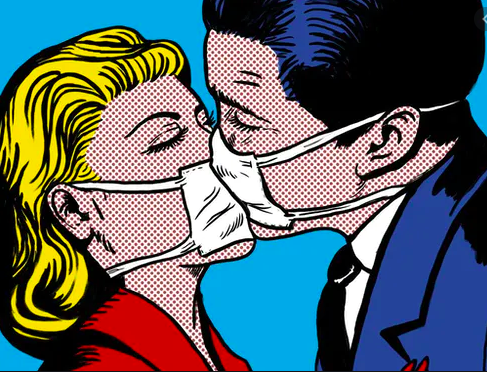 On Love and Risk

Remember when, back in the 1980s, just as we were getting sexually active (if you’re my age), and AIDS hit….? There were all those adverts, in the UK at least, on billboards, in the press, perhaps even on TV – (no social media back then), of a gorgeous young woman or man…. And it said, “You want to sleep with her/him? When you sleep with her/him, you are also sleeping with his/her previous lovers and their previous lovers and their previous lovers, etc…” Sometimes there were diagrams connecting all of the people in the person’s sexual history to your own, and a dark message warning you to understand that “You are sleeping with all these people at once”.

Another series of “Safe Sex in the time of AIDS” adverts emphasised how someone who was free of HIV and AIDS looked this way (beautiful and healthy), and how she might look being HIV positive, seven years down the line (equally beautiful and healthy). i.e., Don’t trust appearances.

They were sobering adverts, landing at a vulnerable and influenceable time of my life, and had the effect of making you (me) dash to the nearest Boots the Chemist for a quick and shifty purchase of a pack of condoms.

The images and message of those adverts came back to me early in COVID days this year as we began to learn just how much of a “silent spreader” the disease is. Leading to suspicious sideways glances at anyone who came too close, and the nagging question, “Who have you been sleeping/ kissing/ shopping/ eating/ driving/ breathing with?”

Being in a new-ish relationship with Medjool, and more importantly living across a national border with a very different relationship to lockdown (life in France stopped, and life in Switzerland continued), led to some tricky conversations, like, “No – sorry, you may not come to visit my parents because you, and your life’s interactions, pose too much risk, and I am not taking that risk to them”. That was back in May, when rules started to loosen in France, and longish journeys with a “valid-ish excuse” to travel became conceivable. We went without to Medjool to see my parents. It was the right thing to do, by my parents, by all of us who had played it safe, even if we would have all enjoyed his company.

Fast forward through a fairly relaxed Summer to the middle of Autumn, we are back in lockdown in France, and Switzerland is doing its own “lite” version of it again. Medjool has two almost grown up daughters, similar ages to my Ben & Megan, and who have, in one case, recently had COVID and, in the other, currently have it. A couple of days ago he asked if he could sneak across the border at the weekend, and come to live with me for a bit, in order to allow the elder daughter to move into his apartment, giving her more space and comfort.

Medjool was very gracious with his request, emphasised that it was my choice, my decision, and that he could move in with his now ex-wife, upstairs. (Sounds unusual, but it seems to work for them. I am either naïve, not the jealous kind, or he’s really trust-worthy. I believe the latter). Some minutes later, and before I’d seen anything, he sent another message saying that his daughter wanted to come sooner, and staying with his ex-wife wasn’t actually ideal, as she is out and about quite a bit, and therefore more of a risk factor.

I responded, “You want me to say if I prefer you to come to me or go to your ex-wife? Come, you silly sausage”.

And I meant it. Really. I’ve been careful, locked down for a week. Hanging out just with my pets, pet-sitter, and on-line clients. Some extra company would be good.

But something niggled at me, and I wrote this message – meant to be half jokey, half serious (a terrible mix – especially when written, not spoken aloud).

My blogpost this week will start:

My new lover, who I don’t see much because he’s mostly been married, and because he has kids who need him, and work, and another life, and lives in another country (etc etc) wants to come to live with me during COVID times because his daughters have or have just had COVID, and I might be “cleaner” than his less locked down life.

I want to keep him in my life because I am widowed, enjoy some body contact, exchange of body fluids, sex, saliva swaps, etc.

I also value my life and am the only remaining parent for my surviving kids who did not take their lives after their dad died.

Should I jeopardise my own health for this man whose love and body I value in my life?

I hesitated before pressing “send”.

I hesitated again about whether or not to send a follow-up note saying, “And – seriously – come.”

I didn’t. But I stayed close to my laptop to see when Medjool read it. I really wasn’t sure how he’d take it on the infinite scale between “lightly” and “seriously”, and I didn’t want him feeling too harshly scolded. (Just a little).

He was floored. Totally humbled by my message. He sent me a serious, gentle, compassionate message instantly. His voice full of love and understanding.

We “picked up zoom” and talked through the various layers of my message. And I emphasised that I wanted him to come. Risk and all.

But it IS a big topic. Risk, that is.

What risk is when you’re the only remaining parent is so different – to me at least – than when there are two of you in the child-rearing, parenting game. It’s something my widbuds and I talk about quite a lot.

Another too large a proportion of kids lose both parents when they are still too young. And too young is definitely up to 25 or 30.

I know or know of a few people who lost both parents before they left their full-time education. It’s just plain unfair. It’s one thing if it’s unwanted illness. Shit happens, as we know too well. But unnecessary risk-taking leading to death is, well, unnecessary.

I spent my late teens and 20s traipsing over various parts of the world, finding myself short of money and sleeping in bus and train stations, sharing a bedroom with an unknown man in his late 30s in a seedy hotel in London near Victoria station when I was aged 16, because I had been given the summer timetable for the train to Dover for the night boat to Ostend and that day the trains had shifted to the winter timetable – (remember, this is pre-internet and apps and online timetables; just paper tickets and certainly no credit cards for teenagers).

I hitched lifts all over Europe, North Africa and Turkey, sometimes with a girlfriend, but often alone… slept once in a graveyard on the border between Morocco and Algeria, travelled to war-torn Kurdistan in the late 80s, jumped out of a plane, did the world’s then highest bungee jump in New Zealand, and more. I got into some dreadful pickles that I somehow always managed to escape from before things turned too awful. I was lucky. I took lots of risks and always came out okay.

But that was life before kids.

Mike and I took risks too – both with the kids and without. He and I travelled to Kyrgyzstan to build houses, and left the kids behind – then aged (I think) 3, 6 and 8 – with our amazing au pair Poli. It was a risk. We came upon a “just happened” fatal car accident on a remote mountain col. The bodies were still in the car and no help had yet come. It had literally just happened. The accident could have involved us if we’d been there just minutes before.

We took the kids to rural parts of Madagascar, Ghana and Laos, also for house building or other volunteering. Mike got violently ill. I got violently ill. The kids got less ill. We took dangerous-looking cars, precarious-looking buses, and wonky-looking planes. We took anti-malaria tablets that don’t really work. We had anti-rabies injections. Julia got bitten by a lemur and we spent a tense night wondering about rabies.

We certainly took risks. But it felt different when we were all in it together. Sometimes, during a particularly rickety flight, I would be off in my imagination and say to myself, “Well – if the plane goes down, at least we are all in it together”. I wondered many times if it would be my final thought. But not as often as, in my post-loss life, willing the pilot to “Please please please, get the plane down safely…”

Since Mike died, I have been excruciatingly aware of how much less risk I am willing to take. I have long valued my health. I nurture it. I generally eat well and do enough sport. I care for my body, inside and out – not obsessively – but with the wish that it will hold me safe for as many more years, even decades, as possible.

I do not want to catch COVID. Even if people say, “we all will, in the end”.

I just don’t want to be ill. Note even for a few hours, let alone a few days or weeks.

I don’t want to have a temperature and the shivers.

I don’t want to lose my sense of taste or smell and wonder if it will come back okay (sometimes it doesn’t, or worse, comes back wrong, and a plate of green beans tastes and smells of rotten eggs).

I don’t want to feel scared about whether or not I can breathe properly.

I don’t want to miss a day of work or play.

I don’t want to miss a day of my life. I simply don’t. It’s too precious.

My health is too precious.

And I don’t have a back-up plan.

I don’t want my surviving kids to have no parents.

I don’t want my parents to lose another child.

I don’t want my siblings to lose another sibling.

And so I try to balance things. Which means I take less risk.

For many people I work with, mostly in my coaching, living more fully is about taking more risk.

But for myself, at least for the time being, living more fully is about taking less.

And I am okay with that.