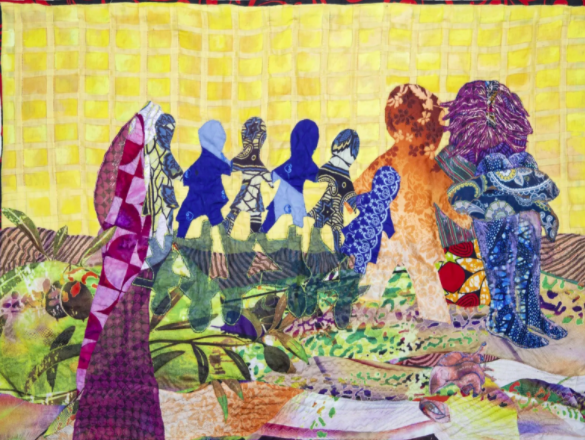 Main Image by Angela Franklin, “Grief Will Teach You Math, When You Subtract One” (2019)
https://demifgallery.com/artworks/9478-angela-franklin-grief-will-teach-you-math-when-you-subtract-2019/

I am no mathematician. I was pretty weak at maths at school, and given the option of having 7 or 8 hours of maths a week vs 3 or 4 hours in my final two years, it was clear I had to do the “weak” option. We actually called it “strong maths” and “weak maths”. My today self objects to that language, but I can live with it. I only made my way through weak maths thanks to the patience, tolerance and warmth of Mr Leigh, still alive today, and very fondly remembered by me, numerous siblings and my parents. That we shared a birthday was another little plus. “Happy birthday Mr. Leigh”. “Happy birthday Emma”.

At university, studying psychology, I got on much better with maths – i.e., statistics –  because suddenly I could see the point. I could literally see the “maths” playing out in real life. And throughout my adult life, even compared with Mike, a proper engineer and builder, it was clear that my day-to-day mental maths, living maths, practical and useful maths, was quicker and better than his. Dividing restaurant bills by any number of people, both with and without tip, working out timezones and currencies, estimating the cost of a shopping trolley, and for all the early years when our bank accounts were separate, who owed how much to whom after two weeks holidaying somewhere…. I was always much closer to the mark – sometimes even right on it – and not because I kept a running total. I just had a felt sense of it. In my bones or head or finger tips.

This practical maths ability, whether with time, dates or numbers, shows up all the time in the post-loss world. I remember dates, number patterns, days, time. I don’t know if I remember up in my head or in my cells.  Both, I am sure.

I had some sense last week, on 14th July, when my long-time school friend Adam, turned 54, that I must be near the age, to the actual day, where Mike first knew, for sure, of his pancreatic cancer diagnosis. Mike turned 53 on 27th July 2016. His sense of a “slight tug in his side” was during mid-October and his first test was on the 28th October. His diagnosis was fully official on the 22nd November after having been mooted as a very likely possibility earlier that month. Chemo started on 25th November.  That whole period of late October to late November was a month of tests, medical RDVs, trips to numerous hospitals and scanning facilities.

So sometime the equivalent of this week, 20-28 July 2020, in my lifetime, aged 53 and 3 months and 3, nearly 4 weeks, Mike learned that he had pancreatic cancer. That is practically, day for day (“jour pour jour”) today.

It makes me feel so sick. So sad and weak. So confused. So unbelieving. I still just don’t get it. He was as healthy as me, if not more so. He was fitter than I am, if not more so. He drank less than I did/do. He never smoked and I do very very occasionally. He was more patient, more tolerant, kinder, a better manager, leader, colleague and sibling. One of my girlfriends called him an angel, and believe me, I have never called any of my friends’ partners an angel. Nor have I ever been called an angel.

No wonder I said somewhat clippily to my childhood friend Adam, “It’s all a gift”, when he says, “Getting on a bit”.

It’s all a nonsense.
And it’s all a gift.