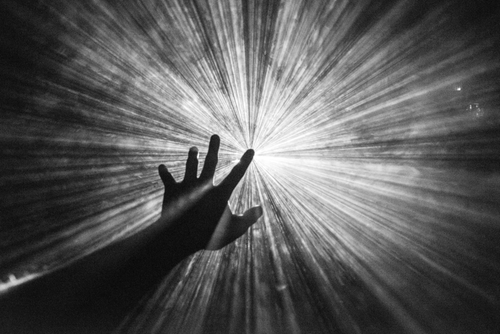 There seems to come a time in life for those of us who do not grow up with formal religion – and perhaps it’s triggered by loss and hardship, perhaps by age – where we search for meaning in losses and in life, and messages or clues that there might be something before and after our time on earth. Even before Mike died I was fumbling and mulling around some of this.

I remember very distinctly, some days before my brother Edward died at the Maison de Tara, he said quite lucidly, “Granny May was standing there at the end of my bed this morning. She was smiling. It was so good to see her”. We didn’t delve very much into the conversation and Ed was in and out of consciousness at the time. He had been mildly perturbed though, because he was lucid enough to know that she had died 10 years earlier. But as I talked about the experience with Tara volunteers, they nodded wisely and said, “yes – that happens to a lot of people at the end of life – people who have already died come to welcome you, to let you know it will be okay”.

I have since read a good bit about this phenomenon and there are many similar stories. As often with this kind of work, there’s no “proof”, just stories. And perhaps people around you saying that they have had messages from people who have died. And you get to choose whether or not you believe stories. I do.

It’s time for me to find time, space and a place to compile some of the messages I have had about how Mike is doing from people who have more sensitivity than I do to feeling into that field. While some of the information I get doesn’t necessarily make 100% logical sense, enough of it does for me to believe that Mike is okay, better than okay, and watching over us. Sometimes it’s soothing, and sometimes it’s crazy-making. I miss him so much and resent the apparent ease he – and Julia – are having now that their tough time on earth is over. I am prepared to believe that he left because his work was done. I find it harder to hear that he and Julia had a pact before she was born that this is what would happen. That he would die, then she would die, and it would all be for his and her and all of our spiritual growth. On a good day I can breathe into and absorb and accept all of it. Today is a good day so I will get some of this down. And not every day is a good day. Sometimes I rant and grit my teeth and say, “how fucking dare you say I needed this?!”

Anyway – in the few days and weeks after Mike died, I got some input from a Shamanic Healer called Iris. Here is some of what she wrote:

On April 8, I did a ceremony for Mike at about 4.30pm. I found him in his room, fully present. The next day, I checked on him again. “I just want to be with my family now, okay? Give me a few days.” I could sense him sending a huge amount of love to all of you, just radiating it. I agreed to come back after the funeral.

At the funeral, he was very present for some of it (your tribute and the song you used to sing together). He really approved of the song. At some point he went to say goodbye to your house and other people or locations. This is common and I’ve seen it at every funeral I’ve been to.

I then went on holiday. I was drinking a bit every night, which meant that this sort of work was out, and I was respecting Mike’s wishes by not interfering.

I finally got back from holiday and one night couldn’t sleep. I got up and knew that I needed to find Mike. I saw him immediately and yes, he was on the other side. He smiled a huge dazzling smile and hugged me like we were old friends. “I followed the path like you said. It was easy!”

I then saw his journey. He set out on a trail through a valley, and then climbed up a mountain. He was wearing trekking-type clothing and carrying a small backpack. He climbed steadily and tirelessly. He stopped when he got to the top and reflected a bit, looking back on where he had just come from. Then he climbed down the other side of the mountain, into a valley with a huge river flowing through it. He reached the river which was not too wide at this point but deep and very swift. As I had seen earlier when I did the spontaneous meditation with him at Maison de Tara, Ed and Mike’s father were standing on the other bank, encouraging him. He dropped the backpack and was suddenly in swimmer’s trunks–not the board short kind but the sort a serious swimmer wears. He had on goggles and possibly a swimming cap. He looked like he was going to do a triathlon or swim the channel. And then he was off, swimming strongly despite the current. On the other side Ed and Mike’s father were there with a towel for him. There was much hugging and maybe some back slapping. They walked off out of sight.

After I had seen this Mike finished speaking. “Tell Emma that she will always be a part of me, and me of her. She is strong, she can and should move on. I was right about the love, but there is more, so much more.” He laughed with absolute joy and delight. “The girls will have a harder time of it than Ben, he knows…But they will all be fine in the end. We’ve done well, haven’t we? We’ve done alright. I couldn’t have asked for a better life, really. Or a better family. We love you all.”

Then on 22nd October 2019 I worked with a Medium called Melissa who had been recommended to me. She spoke about Mike, Julia and Edward without having had any information from me. They (their spirits) just rocked up. The vast majority of what she said made sense. I spoke to her on the day that would have been 32 years since Mike and I first confirmed our relationship, back in 1987, and one of the first things she said was:

He wants you to go on with another person in life. Melissa stopped short at this point and said – “ah – there already is someone isn’t there?”  I told her about Medjool, and she continued:

He sends the white rose. For the pureness of what is happening. There are so many ways that (Medjool) reminds you of your husband. Mike is happy that you are moving on in life and knows that it has not been easy. He is being so encouraging about you moving forward, keeping going on in life.

He asks, “Who put together the shrine in my name?” Mike laughs about it – thinks it’s sweet, but feels a bit embarrassed. He’s a very humble man.

Please don’t have any worry that Ben or Megan will do what Julia did. They are coming into their own. They are understanding things.

There was much more, both about Julia, and Edward. Those might get written up into something in time. Or not.

Most recently, I contacted Iris again to see if she’d be willing to “check in” on Mike. I know enough from her to know that those who have died don’t necessarily want to be disturbed, but here’s what she said.

I found Mike sitting at a small café-style table in a beautiful rose garden. He looked very well, happy and radiant, younger than he was when he died. His hair was dark and he was smiling. There was laughter in his eyes.

“I’m good, I’m really good. You can see.” (Gestures at garden). “Actuall,y as you know, this is all an illusion but it’s a reflection of my inner state–and everything’s coming up roses!” (Chuckles.) “No seriously, I’m well. Dying was hard but it was the best thing that happened to me. That may be difficult to hear but it was essential for a lot of reasons, not only my own soul’s growth but that of Julia’s too.”

“Also it’s good that Emma met (Medjool). She’s happy. She deserves it. May they make each other happy until the end. She couldn’t be with a better person.”

“Is there anything else that you want to tell her?”

“That I’m sorry about Julia. It was always going to be that way. You could say it was written in the stars but it’s more complicated than that. We look at patterns in the layers here and answers as you think of them don’t exist. (Laughs.) Look, I don’t mean to be obtuse, sorry about that. It’s just so much more than I can explain.”

“Right, it’s time for me to go. It was nice to have this chat. Send my love to Emma, to Megan and Ben. Tell them that their dad loves them and always will. You take care now.”

We parted warmly, and then I was back in my room.

To believe or not to believe? To lean on the crutch or not? I don’t know. Like I said earlier, on a good day it brings me solace. On a bad day I just feel resigned. Whichever way, it beats anger and resentment. I have to believe that they are both at peace, that Julia is dancing with Mike, that she needed to be with him for whatever reason.

It doesn’t lessen the missing or the pain, but it wraps them up in some softness and understanding.

2 thoughts on “Messages From Mike”