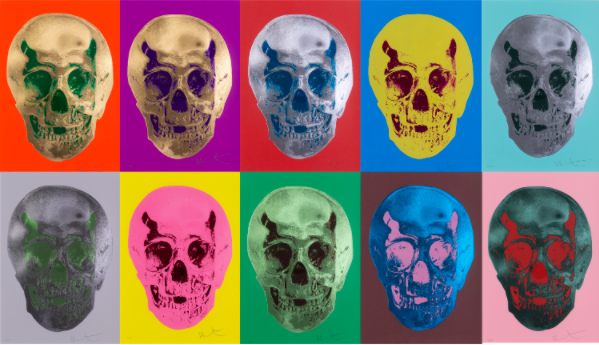 Till Death Do Us Part

Featured Image “Till Death Do Us Part” by Damien Hirst

On this day, 13th April, twenty-four years ago, in 1996, it was snowing lightly up in Grasmere, in the English Lake District. The kind of snow that melted as it touched the ground, but that looked ever so pretty as it was falling. I know, because I was there. I was getting ready to be married to Mike.

Opting to get married in April meant we never suffered any angst about what the weather might be doing. If we’d really wanted to have a sunny or dry day, we wouldn’t have chosen April. And we probably wouldn’t have chosen the UK. But we chose April, for whatever reason that now escapes me, and I liked the idea of not just designing a dress, but also a jacket to go with it and keep me warm outside.

The dress was burnt orange, and the jacket was cream. I still have them. Along with my hat with burnt orange floaty thing, and my ivory shoes. My beautiful friend Sam was in charge of my make-up. I didn’t want anyone who didn’t know me to do it. I wanted to look like me, not like some made-up thing. Sam gently insisted, against my wishes, to put some foundation on my skin. It was the first time I’d used any, and I think I have only worn foundation three times in my entire life. I still have Mike’s waistcoat and cummerbund. And cufflinks I bought him. And the rings we bought each other – though they have been transformed into a necklace.

Friends and family came from all over the UK, continental Europe, and Nathalie, my BFF from Brussels days, schlepped from Paris to be my “Best Woman”, at about 6 months pregnant with her first baby. I don’t think I really knew people who lived further away at that stage. We travelled less back then, and Mike and I wanted to honour people’s efforts to make it up to the far north-west corner of England by having a 3-day wedding, consisting of a posh-to-us Friday evening dinner at the lovely Yew Tree restaurant in Seatoller; the wedding day celebrations in the posh-to-us Wordsworth hotel in Grasmere; followed by a gentle, damp, misty walk (normal-to-us) above and around Grasmere on the Sunday morning.

While we had a civil ceremony and said some vows, I really can’t remember what we said. We were not organised or mature enough to write our own vows. I was a little scared of the whole marriage thing. It had taken me nine years to get to the point of saying “yes” to marriage, and I most definitely didn’t want the heavy-to-me traditional aspects, like vows and promises.  As for the church thing, having spent Sundays in forests, orienteering, rather than in churches while growing up, and with two generations before me in the family who were Pacifists and Quakers rather than traditional church goers, our decision felt perfectly right for us.

We most definitely did not say, “Till Death Do Us Part”, but we should have, and we could have. I didn’t want to say those words because, being a 1960s girl, raised to be independent and equal to all men, I resented the words. I was already into the notion of “choosing joy and happiness”, and while I was more than happy to marry Mike, I didn’t want chains of words around our relationship. And I wasn’t cynical enough about marriage or divorce to feel that the words could be undone if ever we fell out of love with one another.

It just felt better, truer, at that time, not to say those particular words. I didn’t know how life would turn out (do we ever?), and felt that if either of us wanted to leave the marriage, then we would allow that to happen. My mum had commented, while I was a teenager, that marriage vows were rather unrealistic in this day and age, and that committing to rolling “five-year periods” seemed wiser. Something about that idea stuck, and it certainly made the commitment thing feel gentler. From the earliest days of our relationship I felt that Mike was the man for me, the man I wanted to father any prospective children, and most definitely (this is the part I was most sure of), the man I wanted to grow old with. But I didn’t want the weight of words.

While I don’t regret not saying them, I have realised over the three years since Mike died that the words are bonds of love, not chains of commitment or enforced duty. I have realised that if you do get legally married, the only two ways out are death or divorce. I never thought about death. I didn’t have anything against divorce per se, (though I can see it’s a pain in the arse, even when both parties are willing to part); but I never thought about death.

And yet, it’s so obvious. If one in two marriages ends in divorce, so must one in two marriages end in death. Why is it we (I) don’t reflect on that when deciding to get married? For me, particularly as we moved into our 30s and 40s and I came to realise in my fibre and cells just what a special thing we had, I assumed we would both be cosily married to one another until, somehow, we were both ancient and died together. Or if not together, then maximum a few hours or days apart.

Today is 13th April 2020. It is my second birthday. It’s Easter Monday, and back in 1967 when I was born, 27th March – my birth day – was Easter Monday. It’s why my middle name is Pascale, from Pâques/Pasqua/Pascua. (And the Emma is Madame Bovary, not Jane Austen – for the record and while we are on the topic).

In 2017, 13th April was the day Mike and I would/should have been married for 21 years. It was a glorious day. Apart from the fact that it was horrendous. On our 21st wedding anniversary, we cremated him. We were married for 20 years and 11 months and 27 days. And together for 9 years before that.

And in October, it will be our anniversary of getting together. Still. 33 years.

I know Mike’s dead. I really do. And if I was initially the reluctant party in terms of getting married, I came to love being married. I don’t like being widowed. It is not the same as divorced. How can it be? It’s just a deep, sticky, painful empty mess. Which sounds like a contradiction in terms. That’s probably because it is. Nothing coherent about any of it.

Thank you for the love, the learning, the growth, the fun, the joy, the babies, the memories. Thank you for our love and our life.

I so wish you hadn’t died.