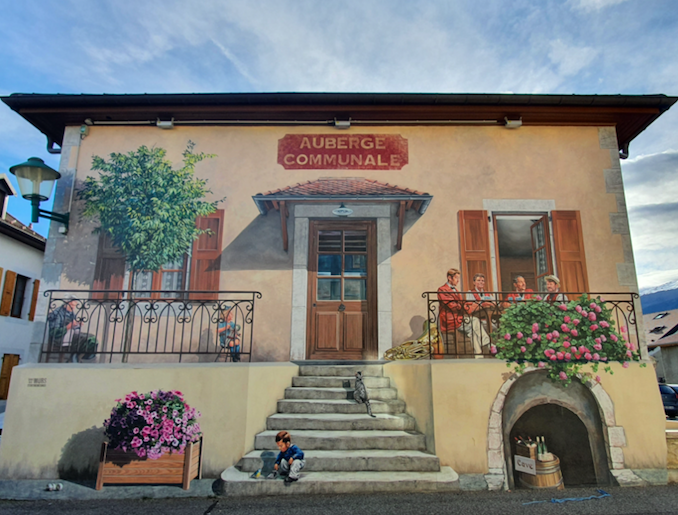 Tread Lightly on my Memories

I live in Small Town France. In a village, actually. It’s a lovely, charming village called Sergy, nestling under the Jura mountain range, and looking across (over Geneva, Switzerland) towards the Mont Blanc.

When Mike and I decided to buy the shell of the farm house(s) and barn in the heart of the village in 1999, they had been abandoned a good long while. There was a calendar above a fireplace in a room/space with a muddy, earth floor, which said 1963. I remember because it was Mike’s birth year. The house, by then, had been uninhabited for 36 years.

The house was unliveable-in (by my standards, and fortunately Mike’s too). Mike spent 18 months renovating it, putting in electricity, running water, stairways, landings and bannisters, rooms, bathrooms and a kitchen, windows, ably aided by the “trailing spouse”, Bill, of one of my then-colleagues, Susie. Ben was a new-born, and I was pregnant with Megan. (Though I was not pregnant for 18 months. It just feels like a lot was going on around then).

We moved in in July 2001 when Megan was just 3 months old. We still had jobs to do but it was liveable in. Lights and water worked. The very day we moved in, we had a guest – dear friend/colleague Betsy – who stayed in what was to be “Ben’s room” when he could safely manage a room with steep, open stairs and a mezzanine. But for a good long while it was the guest room.

Betsy woke up to water flowing down her bedroom wall (I was having a shower and pipes and things were not properly connected. Clearly). She had the presence of mind to find a 3M sticky and position it with an arrow from whence the water sprang. Mike figured out what was up. Shortly after, no more leak. And no leak since.

I was grateful for a long time that we’d had a guest the night we moved in – otherwise how long might it have taken for us to discover the leak? We didn’t really need to go to that part of the house. Heck, I am still grateful. Thank you, Betsy, for your vigilance and speedy, practical thinking.

Over the past 20 years, the village has grown – from about 1,500 people to today’s 2,000 or so residents. We are still right in the heart of it, and so we haven’t felt too much of the expansion – nothing much has changed around the old, 350+ year old houses that make up our part of the village. But a bakery has arrived, a small library, the school has expanded with a new building, there’s a “salle des fêtes” for concerts, events, shows, and parties (and yes – we had Mike’s celebration of life there). And there’s even a restaurant.

Not just any restaurant. A proper, high-class-by-my-standards restaurant. Quality food, carefully made. Established maybe 8 years or so ago. A welcome addition to the village, and people do come from miles around.  Over 100 euros for two people (expensive by my standards – definitely “treat” material).

It’s called “Rita & Albert” and is run by, erm, Rita & Albert. She is a Spaniard, and he is a Frenchman from the local area. The food is all fresh, mostly locally-sourced ingredients, cooked with Spanish flair. The wine list is a mix of French and Spanish. The fizz is Cava or Champagne. The best of two delectable cuisines. Everyone is happy.

Mike and I would go there pretty religiously four times a year. For my birthday in March, for his birthday in July, for our wedding anniversary in April, and for our “celebration of when we first got together” in October. We were together for 9 years before we got married, and so celebrating “when we got together” was always very important. After we got married it stayed important. More so, perhaps, than our wedding anniversary.  We didn’t go out for posh meals often, and because it felt special and expensive, we’d reserve Rita & Albert for “special occasions”. It was always a treat.

After Edward, my brother, died in January 2016, we had a commemorative dinner there for friends and family in lieu of a funeral. After Mike died just 6 months before “what would have been our 30-year anniversary of being together”, Mike’s sister Helen joined me for dinner, in October 2017. In March 2018 we celebrated my dad’s 80th birthday there. That was the last time I went. It’s not a place you (I) go for a casual lunch or dinner. It’s a special place and needs a special reason.

Shortly after Medjool came into my life some 8 months ago, and as he began to explore the delights of small-town France and my village in particular, he asked about Rita & Albert. I think I was fairly non-committal about it. I said it was a very good restaurant. I said I had barely been since Mike died. That it had been a special place, for special occasions. I am sure I said it was expensive. Unconsciously I am sure I was trying to put him off.

I forget the exact chain of events but at some stage, Medjool suggested we go. I consciously unconsciously put him off the idea. It felt weird. It felt wrong. I said something like, “You don’t need to be Mike. And anyway, you’re vegetarian. You won’t like it”. Medjool is a vegetarian (pretty much) and like many classy restaurants, Rita & Albert specialises in doing a few things very well. Cod and pork are their staples.  Perhaps occasionally there’s a piece of beef. And gorgeous local & seasonal vegetables. Oh – and amazing desserts. That’s about it. Under duress and with warning they might be able to come up with a nutritious but not very inspired vegetarian dish. When we went for my dad’s 80th, and Julia was well into her vegan phase, we struggled to get her more than vegetables, even with ample warning.

Fast forward to the end of 2019, my Christmas gift from Medjool was a meal voucher (not pre-paid – but an invitation) for Dinner for Two Chez Rita & Albert. I was initially delighted with the idea. Truly. I felt, “oh – he really wants to try it, to have a nice dinner out with me, we won’t need to drive, etc”. It took ages for us to book anything and eventually we settled on a date around Valentine’s day. All the better – two for the price of one – Christmas and Valentine’s. Makes sense.

But as the date neared, I got cold feet. It all felt off. I told him I was going to cancel the restaurant booking and I did. I went over all kinds of theories in my head. Admittedly I had been having a funky week and I was more than a bit cross. Among the scenarios I ran were:

** Stop trying to be Mike! You can’t be Mike. Be yourself. That’s more than good enough.
** You’re VEGETARIAN-almost VEGAN! There’s nothing there for you to eat. (Even though he’s more of a flexitarian and loves fish so he’d be happy with the delish-cod-fish).
** Am I so petty that I can’t share my former life more fully with him?

And then I started to get closer to the mark:

** I can’t bear it if it’s not special for him. It was so special for me and Mike. What happens if Medjool says, “yeah – that was okay” and is not wowed? Then what?

I talked it over with a couple of friends.

One friend, Nicole, said, “What? You rejected his Christmas gift?! How did he take that?!?!”

Another friend, Laraba, said words to the effect of, “I think that’s a load of bollocks, Emma – it’s not about him being Vegetarian and you know it. It’s just that it’s yours and Mike’s place. It’s your special place. It’s about you and Mike. You don’t just transfer those memories”.

And Tom Zuba suggested I take him there for a casual “apero/nibbles” but it’s not that kind of place – in France you get your table for the evening and there’s no fast table turnover.

But the idea sparked another one. And I finally figured out what my heel-digging resistance was about.

It WAS my place and Mike’s. I really wouldn’t be able to bear it if he didn’t LOVE it – the ambiance, the owners, the food, the experience. If he complained about the price, I’d want to slap him. And end the relationship. Probably. Possibly. Perhaps. Maybe.

Yes, it is a special place. It’s part of me and the life I had with Mike. We didn’t take the kids there. It was too grown up (not to mention expensive). Dinners last 2.5-3 hours. It’s not for “anyone, anytime, anywhere”. It’s special. To me. To me and Mike. A rare gem in our part of small-town France. And FULL to the brim of happy memories.

Eventually I put my big girl trousers on and decided that I was grown up enough to share it with Medjool. That I did want to go there again. That, after all, if a girlfriend invited me there, I’d go, so I had to be okay about eating there with Medjool. But I would have to invite him, not the other way around.

A better psychologist than me would read all sorts of things into this about independence and power and money and whatnot, but for now, it’s just that I can’t bear Medjool not to LOVE it. And the risk feels so much lower if it’s my invitation. Less heavy. More casual.

Yes – we will go there, but on my terms, on my dollar (euro). And he will like it. I know he will. And he will be my guest. So that I can do my utmost to protect my still-and-always-forever-hurting heart.

I am reminded of W.B. Yeats’ poem, often read at weddings (though not at ours):

Had I the heavens’ embroidered cloths,
Enwrought with golden and silver light,
The blue and the dim and the dark cloths,
Of night and light and the half-light,
I would spread the cloths under your feet:
But I, being poor, have only my dreams;
I have spread my dreams under your feet;
Tread softly because you tread on my dreams.

1 thought on “Tread Lightly on my Memories”