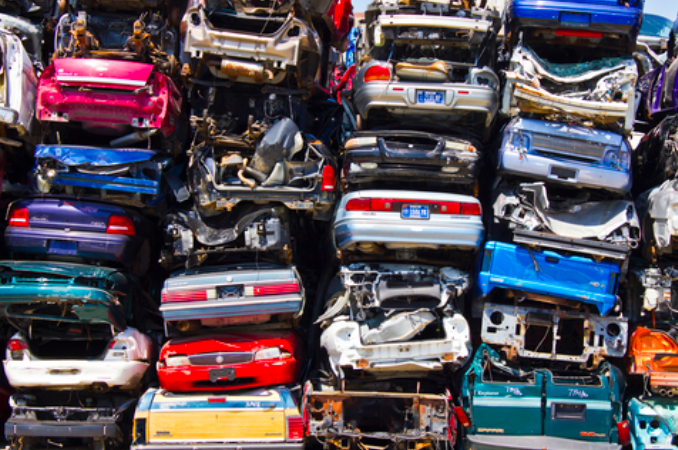 It’s Just a Piece of Metal

One of my favourite Mike stories, dating from before I met him, was frequently regaled in family conversations. I am sure that over almost thirty years, the story popped up at least once a year. More often after the kids were born. It made it onto the “Stories of Mike” CD Mike and Trisha recorded in the last weeks of his life while at the hospice in Geneva.

In brief it was about when Mike totalled his mum’s car when a new driver. He’d taken a curve too fast, in the dark. It was a bit skiddy, and he hit the road’s railing and bounced along it until the car came to a standstill. He must have been about 18 or 19 at the time. He managed to get home, albeit shaken.

His mum went ape-shit (in Mike’s words). I realise, being a parent myself, that that anger is all about fear and relief. She didn’t enquire about Mike, but just ranted about the car, her car, “My car!”. Again, fear talking – she could see Mike alive and well in front of her eyes, so transferred all her fear and relief onto the state of the car.

Mike’s dad, however, looked at him calmly, and asked,

“Was any other car or person involved?” (No)

“Ok, I’ll make you a cup of tea. Go up to bed, get some rest. You’ll be shaken. We’ll talk about it in the morning. As for the car, it’s just a piece of metal”.

It was an immensely formative experience for Mike, and he learned much in that moment – about the value of human life relative to a car; how he would choose to respond versus react to others’ mistakes; how he wanted to parent when it was his turn; and no doubt more. Even I learned much from that story, and I witnessed many times how easily I might have slipped, (or indeed did slip), into a “fearful-relief-angry-react mode” when one of the kids did something scary and daft.

Fast forward to this week. I was driving home a little after 21h00 with Fran my pet sitter. We’d seen a film and were chatting away. It’s pretty rural where I live, not well lit, fields all around. As I went around a bend in the fast road, I wondered if I caught sight of a moving light in the field to my right. I said to Fran, “was that someone or a car in the field just there?” She felt she might also have seen something. I thought we should go back, all the while wondering, “Could it really have been an accident? Why isn’t an ambulance there? Why has no-one stopped? It is safe to stop here? Unless it’s literally just happened and we are first to notice?”

We managed to turn back around and went fairly carefully back to where we thought we had seen the incident and sure enough, there was an upturned car and we pulled over and put on the hazard lights.

It was a tricky spot in the road – very dark and on a bend, and we now needed to cross over to the other side and down a bank, but we saw a small light bobbing around. I called out and found a woman stumbling uncertainly with her phone torch on towards the road.

She was hurt but not incapacitated. We looked after her by the side of the road for a while until a friend came (she didn’t want the ambulance called out but the friend would take her to A&E), kept her warm, kept her talking, learned a bit about her, and what she felt had happened (she didn’t know – she was totally flummoxed. Perhaps a front tyre bursting then the car losing control).

She talked about how relieved she was that her baby daughter hadn’t been with her in the car. But she was so upset about the car. She was young – probably mid- to late-20s. It was the only thing she felt she owned. She needed it for work. “My car – ma voiture, ma voiture!”

As Fran and I got back into our car and drove off, I felt proud of myself, of us. Proud that I had really questioned what I might have seen in the field (as we turned back again the last time to go home, I realised that all I had seen was my headlights catching Rebecca’s car number plate – just a flash of light); proud that we had had the courage to go back and just check, and then stay and help (all kinds of thoughts of “is this safe?” had entered my mind; as well as “if there is something, surely someone else will help” (and yet, despite perhaps 10 other cars passing in the time before we got back there, and while we were there, no-one else stopped – it was a tricky spot indeed).

But mostly I was proud that I have Mike’s words, Mike’s legacy, Mike’s values and principles so close to the surface. They are also mine.

I speak, live and breathe the best of Mike.