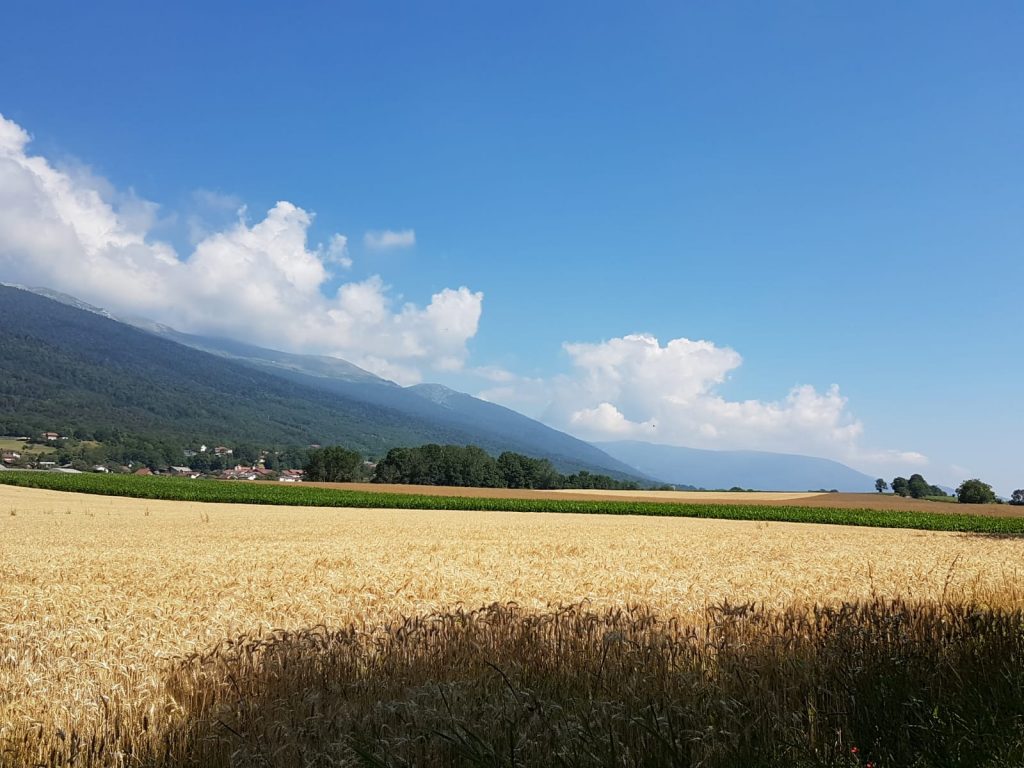 Photo of local run/walk under the Jura hills

In 1986, back in the last millennium, back when there were dinosaurs, there was a popular song by The Bangles – “Manic Monday”.  In the song, the lead singer wants to go back to Sunday.

Since Mike died, Sundays have been hard. The day we spent being a full family of five. Sleeping in “till we woke up”, going on a run, having a shower afterwards, making love if we could wangle it. Cooking, reading, cleaning a bit, playing music, helping the kids with homework.

We didn’t do extraordinary things. Occasionally, yes, we cajoled the kids to go out on a long-ish walk in the hills or mountains. But mostly it was just catching up on the week just gone, and getting ready for the week to come.

We just did our stuff. A feisty and fearless family of five. None of this half-hearted, bereft, tremulous trio of three.

Julia died on a Sunday night. Eight weeks ago. To the minute as I write this, I was aware that “this might be it”. She had been gone almost three hours and there had been no news. The authorities were informed. Search parties (friends) were out looking. I was awaiting the call, and one came. Non-committal at first, but enough said – and not said – for me to know that Julia that was not well. Not in good shape.

But until those words, “I am sorry” are not said, there is hope, right? Even when every cell of my body screamed, “Fuck, fuck, fuck” or worse.

Today, Sunday, was one of those simply screwy Sundays. A perfect illustration of the utterly abnormal normal that is common in the life of someone who has lost a loved one.

Going shopping for food because I have been away and we had guests tonight and I will be gone again for a few days taking Megan to university. Needing to prepare the house for Ben being alone, and for the arrival of a new pet sitter who will help with the pets for the next five weeks.

Going from shop to shop to ensure that we have what we need. Inevitably bumping into someone I know – albeit not well.  Béatrice, a woman who works in the dry-cleaning shop in the local mall.  Someone who knows about Mike, but didn’t know about Julia. Knowing her well enough not to just glide quickly through the “Ça va?” “Oui, ça va”, and onto the next aisle, but, somewhere between the oil & vinegar and the exotic food, tell her “the latest”.

It’s almost banal sometimes. I don’t feel the shock of the news. (Not yet. I know I will, but not yet). I tell it like it is. As though I had a bout of ‘flu last week and that is the biggest news item in my life. “My youngest daughter died by suicide eight weeks ago today”. I forget that others are hit as if by a tsunami at the news. That they need time to process the information. I am reminded of George Clooney in “The Perfect Storm” where he goes patiently (willingly?) with full acceptance to his death. I am detached from my life.

I do a mini-counselling session with Béatrice, right there in the supermarket, and am relieved – yes – relieved – when my friend tells me about a friend of hers whose husband was diagnosed recently with something one day, and then died 15 days later. It washes over me. Other shit happens. We have both spilled our beans (so to speak), and we carry on with our shopping, avoiding each other’s eyes when we pass one another in other aisles.

Then I go to the déchetterie (municipal tip) with an Ikea bag’s-worth of Julia’s school stuff from her home-schooling time this year. She’d taken over Ben’s room and he would like it back. Or at least, he would like it tidier. He’d been thoughtful. He’d put the things on the top that he thought I might want to keep. Books with her hand-writing. Revision notes. Art work. English. Poems.

I have never spent so long going through papers at the paper skip. Gently separating the paper from the plastic covers. Hardening my heart as I chucked text book after text book into the skip. Yes, some remorse – after all, perhaps some other kid might benefit from these books – but I just cannot expend the energy to find a suitable home.

Later at home, finding a big 3M post-it note that said, “Jubee – please leave your phone downstairs”. It was a constant battle, persuading Julia not to be on her phone all night, not to have her Instagramming, Snapchatting, Whatsapping through the wee hours. The sticky had to go in the paper recycling container. Scrunched up. It was my writing, not hers, so I figured it was okay.

Going on a run with the dog. My first run since early May when I did the Geneva semi-marathon. Getting home, having enjoyed the summer weather and inspired by my apparently okay level of fitness, I decide to enter the Lausanne semi-marathon in October. The site I register on has our family’s details as everyone has done runs in the past. A year ago, I pressed “delete” on Mike’s information. Today I pressed “delete” on Julia’s information.

And after that, calling my parents to plan a trip in September for my mum’s 80th birthday. Julia won’t be there but she should have been. Megan won’t be there either because her uni course starts a month sooner than we thought it might. Just me & Ben. And Medjool, which makes my parents insanely happy.

Mum wanting to talk about Julia because she’s so much further along in her “acceptance” of Julia’s decision to take her life. I almost cannot breathe. In the end I say, “I am busy today, so let’s just fix the dates. I can’t talk about Julia yet. Maybe when I am with you I will manage”.

Task-focused, I do the minimum required and get off the phone, back to the safety of the unpacking of the shopping.

And later, making vegan food for our guests, despite none of them/us being vegan. Just that being the way I made food for a larger number of people this last year so that Julia might eat. Julia might actually have eaten well at tonight’s meal.

Ben, Megan, me, Medjool and his mum. Gracious, the both of them. Darling people. There’s plenty of news, updates, plans to share, just with Megan and Ben’s activities. We concentrate on them. Julia’s name barely mentioned. Which is fine by me for now. Though I make amends as we part company.

Medjool’s mum said how much she liked meeting my older two. I know she’d have liked Julia too. She would have been understanding of her. I say Julia’s name. And add that I cannot talk about her at the moment. Maybe another time. I wish Medjool’s mum had known her. And Medjool too. He only met her once, and that was before we were even “official”.

I will talk of her more. Much more. Sometime.

Just maybe not on a Sunday. Not on an abnormally normal, screwy Sunday.