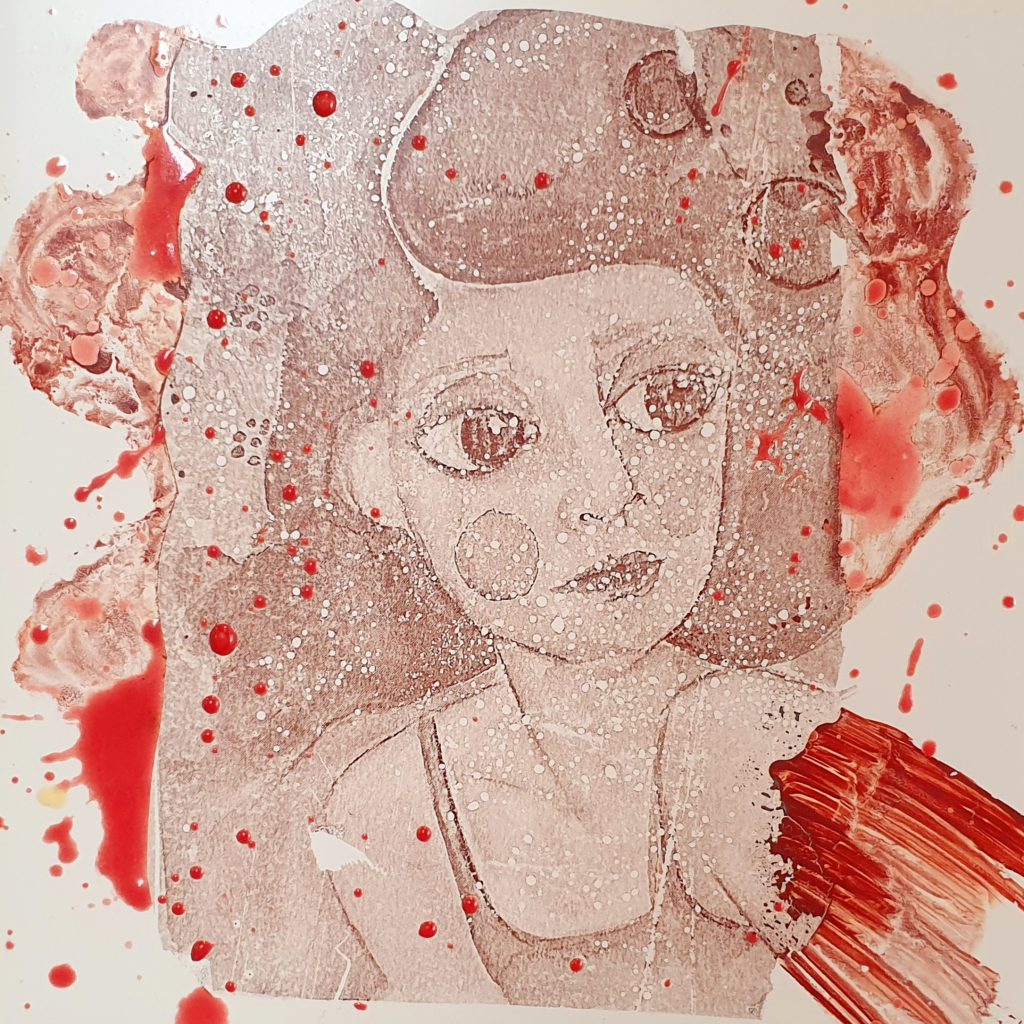 So many absurdities about today. About this day, about this date. This date this year, and this date in recent years.

Today is Mike’s birthday. He would be 56. Except he’s not because he’s forever 53.

Mike is not here.

Julia is not here.

The incredulousness of those two absurdities is too vast for my brain to comprehend.

I cannot even begin to feel and think, let alone write, of Julia’s absence. I am still almost fully immune to the pain, from any understanding of her death.  From its impact on me and us today, and stretching into the future.

So be it. I know it will take months for pain and realisation to start to sink in. I have learned how those closest to the epicentre of a major loss can function “competently” for months through the use of a Teflon shock suit. For which I am grateful. It will wear thin.

I try to piece together bits of history. To pick up some breadcrumbs that might begin to tell a story. There are so many breadcrumbs, but they are all so crumbly and fragile. So distressed.

How did we get from 27th July just a few years ago when we would be happily on holiday as an intrepid and adventurous group of five, to 27th July 2019, a ragged, worn, weathered band of just three?

The two gaping holes are cavernous.

Mike’s birthday, 27th July, was often a date where we’d be on holiday. For the longest time, we’d be away, somewhere interesting, doing interesting things.

But from the enjoyment and delight we had in the past on this date, to the pain and distress now, well it beggars belief.

Going back to some recent years that I remember… and that some checking in my calendar corroborates…though some details might be lost or wrong….

27th July 2011 – Mike’s 48th birthday.  We were in Madagascar. I remember Mike being ill on his birthday in the capital, Antananarivo. We were doing volunteer work with Habitat for Humanity and some friends had come along with us for the ride. We’d only just arrived, I think, and were still enjoying the ease of being in the capital. The restaurant we were eating at had prepared a cake for Mike’s birthday, which he just couldn’t even get a bite of in himself because of feeling so poorly. He felt so bad about it.

27th July 2012 – Mike’s 49th birthday.  My diary says that Mike & I were travelling sans enfants by train to the Swiss Alpine mountain running event near Davos. We befriended the lovely Julie F who later designed my website and blogsite and has remained a firm friend. I saw her and her husband just last week.  Mike and I had both registered for the 78K mountain trail but I’d just had a serious bout of ‘flu earlier that week, and downgraded myself to the 42K event. Still a full mountain marathon. I spent a long time in the bath after my event, then spent an even longer time waiting for Mike to come in at the finish, because he took hours longer than expected due to debilitating cramps. Soon after that we had a UK-based holiday, introducing the kids to our roots in Derbyshire & South Wales.

27th July 2013 – Mike’s 50th birthday.  We divided and conquered in the ferrying around of kids and I was collecting Julia from a summer camp up in the French Jura. But we celebrated at a restaurant in nearby Choully. Soon after that we headed off to Ghana, another volunteering trip, building & teaching with DIVOG/Adanu and joined by some lovely team mates.

27th July 2014 – Mike’s 51st birthday. I was travelling back from Byron Katie’s 9-day School for the Work, utterly exhausted but also somehow cleansed. We really tried not to miss one another’s birthdays but I remember Mike saying, “oh lass, it’s just a number, it’s just a day. And anyway, you’re back by the evening”. That was so Mike. Soon after that we headed off walking around the Mont Blanc, along with Kyrsten D, my “3rd daughter”.

27th July 2015 – Mike’s 52nd birthday. By then my brother Ed was very ill indeed. My diary says I visited him in hospital that day. I did almost every day. He was at the Geneva hospital specialising in physical rehabilitation – Beau Séjour. We celebrated Mike’s birthday at the same little Swiss restaurant in Choully, and cousin John, who was-is so very close to Ed, was there with us too. Soon after that we headed off to Laos for a volunteering holiday teaching. This time just the five of us. I hadn’t had the energy to organise a team trip, what with Ed’s needs. It was the last of Mike’s birthdays with all five of us present and alive. Just four years ago. How is that even possible?

27th July 2016 – Mike’s 53rd birthday, and his last. Not that any of us knew it. Megan was in Canada with a school friend’s family. Julia was at a dance camp in Les Contamines, and Ben was doing a climbing camp in Argentière. Mike and I stole a few days away in Les Bauges. Our last long weekend together, just the two of us. Walking and running with Black the dog for company too, taking in some summits, catching up on one other, as by then we were apart four days a week each week. Enjoying the freshness of the French Alps in the summer, lazy love-making in the late afternoon after whatever outing we’d had, and simply enjoying us-time and our first AirBnB experience. Soon after that we took Ben & Julia to the Isle of Lewis & Harris and the Isle of Skye where we walked craggy peaks and ridges, and even ascended the Inaccessible Pinnacle. Just four of us. I remain so sorry that Megan wasn’t there with us for that holiday. Mike’s last. Just months later, Mike was diagnosed with pancreatic cancer. I still wonder if I see any signs in the photos from that time. I just don’t know.

27th July 2017 – what would have been Mike’s 54th birthday. Four of us again, but a different four. No Mike. Just me and three beautiful, grieving teenage kids. We were back in Wales, intentionally close to being able to celebrate our very dear and very very lucky aunt & uncle’s 50th wedding anniversary (so so so hard when you know your chances of having even a 25th wedding anniversary are shot).  Ben suggested we honour Mike by climbing Snowdon, Wales’ highest peak, on his birthday. Which we did, despite the weather being shite. I have heart-rending photos of us all on the mountain, cold, miserable, drenched, looking like drowned rats, Ben encouraging Megan for the last few metres to the summit, Julia proud as punch that she’d made it ahead of them. It was, frankly, awful. But we have that memory, hard as it is.

27th July 2018 – what would have been Mike’s 55th birthday. Sandra O’C, a friend and former colleague, enabled a beautiful and memorable day on a boat around Cape Cod. We smiled, we sunned, we splashed, we tripped down memory lane. We toasted Mike multiple times. We all seemed able to talk about him that day. It was “better” than the 2017 one. Hard and happy and sad and glad. A bigger range of emotions possible. 2017 had been just too hard and numb and forced. Again, just four of us present.

Which brings us to 27th July 2019 – what would have been Mike’s 56th birthday. And now we are three.  In Santo Domingo in the Dominican Republic. In the fancy, tropical Caribbean. It was Julia’s idea to come to the Caribbean. To have a beach holiday. To not be racing around, or up and down, mountains. To not be cold and wet in July and August. Yet again, we are having a holiday in part enabled by another friendship going back over three decades, John W from European School Brussels days.

Many treats in the day – some gentle sight-seeing, a lovely, encouraging conversation with one of my dearest wid-buds, Michelle LK; and later a soul soothing catch-up with sweet Medjool. Then a precious gift of a delicious dinner being made for us all by John at a local friend’s stunning house. Some toasting and honouring of Mike and the hostess’s own dead husband over dinner. She misses him horribly after ten years. The road is endless.

But no mention of Julia.

Too hard. No words. Impossible to imagine articulating this loss over just an evening’s dinner.

I can barely get my head around Mike’s absence.

No words exist. No language. And as yet, no feeling. Just numb.