I Don’t Recognise My Life

There are films about people who go to sleep and wake up remembering nothing; or people who go into hospital for surgery and awaken in someone else’s life. They have lost all sense of who they are, who their relationships are with, what they do…. A terrifyingly fearful void where all of the visible and invisible structures should be. They don’t recognise their life.

I don’t either. Clearly, I exaggerate compared with the films I hint at. And I trust that I am a way away from any signs of dementia – though grief plus pre-menopause do play a fair few tricks on my memory and cognition. My kids despair at what I am forgetting these days.  Big stuff.

But at some level, my life is unrecognisable to me. Many of my “points de repère” have gone. Key people, structures, touchpoints, reference points, fixtures, routines. All of the stuff of day-to-day living. It’s only been 17 months (tomorrow), and yet I look at my diary for the week and month, and it’s alien to me.  There’s no schedule of dropping off and picking up kids from activities on the fridge, colour-coded by type of activity. There’s no appointment in my diary, repeating from week to week on Thursdays at 20h30, for me to collect Mike from the airport station.  Not that I would ever have forgotten – I just didn’t want to overbook accidentally. It’s not that my diary is empty – it’s not. It’s just alien. Foreign.

I found a playlist on Spotify this evening and heard Roberta Flack sing “Bridge over Troubled Water”. I hadn’t heard her version before. It was beautiful, but all off-kilter rhythmically compared with any other version I have heard. Rubato doesn’t even cover it. I’d need to listen again to figure out what happens to the time signature.  Another time. Have a listen or a lookylisten.  https://www.youtube.com/watch?v=k49yMJE8jyg or https://open.spotify.com/track/5ylhti1OHcdt5TNZV7bPrn?si=x5mxVuYcSJqDw5uVCVguNg

This week removed yet another peg holding this floppy tent of a life together. More gaping void and flapping emptiness. Two girls settled in boarding school. Ben shortly to head off to university. When that happens, with no Mike at home, what pegs will remain? All of my pegs have been people in my family. Out of five pegs, four will have gone, one permanently. Just I remain at home. There’s not a lot of good one peg can do in holding up a tent. 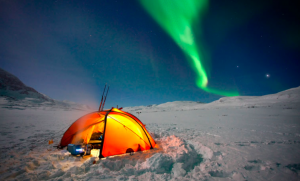 The good thing about a tent is that it’s mobile, collapsible, transportable. I can escape with my tent.  And I do. I have already. And I shall again.

I am avoiding September like the plague. I foresaw months ago that it would be full of grief landmines, with no kids at home, none of my “routine-for-the-past-19-years” in place. No regular touchpoints, day in day out, week after week, with the kids, with Mike. I am postponing September’s emptiness till October. And then I will knuckle down – at least for a bit, and try to figure out this new life of mine.

But for now, some treats. I added a day this week in the UK, after sorting out the girls, to have a special break with dear university friends, Victoria and Bryony, that I have known since I was 18 (let’s just say that’s 33 years or so). The last time the three of us were together was at Mike’s & my wedding in 1996.  The time before that was probably when the three of us travelled around Turkey for a month in 1987. 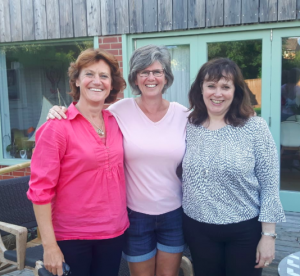 Balm to my damaged soul. Real comfort and tenderness. A care package in the form of girlfriends’ warm hugging arms, teary eyes, stories and memories shared. Both women so special in that they knew Don, Ed and Mike. Not many people in my life knew all three of my too-soon dead men.

And tomorrow, earlier than a midsummer’s dawn, I head off to Corsica to walk the GR20. Another gift to myself and my absent Mike. A wish that we postponed (foolishly) till “after the kids had left home”. Mike felt the kids wouldn’t stomach it. He said, when I suggested it for 2016, “The GR20 looks like the Tour du Mont Blanc on steroids. The kids won’t hack it. Let’s do that, you and me, when they leave home. Let’s go in a September when they’ve gone”. It probably wouldn’t have been for a couple of years. If Mike hadn’t died, I am sure Julia wouldn’t be going to boarding school. But we didn’t do it.

Instead I will do it, to honour Mike, to honour us, to honour shitty, painful widowing empty nesting. Accompanied for half of the mountain walk by another long-time girlfriend, Nathalie, this one from Brussels days, and since I was 8, who now lives in Boston. Flying overnight right now to make it happen. I am truly honoured. 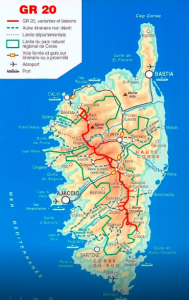 People are saying, “Wow – GR20! Enjoy it! It will be great!”  It’s hard for me to get all excited. (Nervous for sure. Not sure my level of fitness is up to scratch). Excited at seeing my old bestie, for sure. But my excitement is heavy, leaden. There’s little lightness to joy these days. The quality of my joy has transformed. It’s there. I find it – joy. But it’s changed. It has a leaden core now, leaden boundaries and leaden edges. Heavy joy.

So yes – my life is unrecognisable. I wouldn’t be skiving off my freelance work week after week if the kids were here, if Mike were here. I’d be well into our September routine. Not taking flights and walking steep mountain trails and sharing sweaty smelly nights with myriad strangers.

My life is unrecognisable. There are some nice things in my new life because I damn well put them there, to give myself a break, to lessen the difficulty of all of these unwanted transitions.

But it’s all totally unrecognisable to me.