“Adminalation” – that’s a cross between Admin and Annihilation.

Megan went back to the UK last night. Julia’s been gone on an exotic holiday for a few days. So it’s just Ben and me now for a bit. Having had some pretty unstructured days recently, I thought I’d put a bit of structure on today. Not a lot. Just a label over the day in my calendar. “Admin”. The Admin resulting from a death.

I have always had an aversion to admin – even “good admin” like preparing invoices so I get paid. Or sorting out my expenses for my accountant, which I manage to leave until the last minute every year. I don’t like admin language, and when it’s in French it’s doubly bad. The words are too long and some I haven’t seen before. And then there’s death admin, in French, which makes it exponentially worse. So I was annihilated by the admin. Or Adminilated. 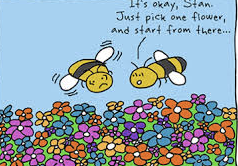 Where I got to was putting stuff in piles and moving the piles around so it looked more neat and tidy. Unopened letters by the tens are also in piles. Ones to me that look like condolence cards. Ones to Mike that look official and boring and not too scary. And ones to me that look official and hard work and very scary. I once read a story about a therapist’s client who simply could not open three letters he had received for fear that they confirmed the bad story he’d been making up in his head about his professional reputation. I can see how much power unopened letters hold. I will get to them all eventually. But not today.

I have decided that a good resource for a recently bereaved person is a hand-holding guide much as I imagine senior expats and their trailing spouses get when they land in a new country. Someone to take you to the rental agencies, banks, schools, etc. I’d like one of these please to take me to the notaire, the bank, the accountant, the death certificate place, and for ashes collection at the crematorium. Perhaps there’s a new business opportunity there. Instead of Expat guide I suppose it could be an Exlife guide. 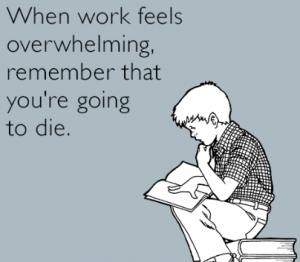 The number of phone calls and emails I am making where I have to say the words “my husband who died recently” is impossible to count. Sometimes I try to avoid saying it but then I stumble over my words even more. Cancelling Mike’s mobile phone provider was particularly tough. The chap I spoke to didn’t miss a beat and just said “well – we need some proof that he’s died and that you were married”.  (I think he did say “were” not “are”).

I can see that much of this admin will create its own admin. I don’t have a death certificate yet because to get one I need to prove we were married (no-one in a Latin part of the world can understand the concept of women keeping maiden names so your bog standard phone bill isn’t enough). But our wedding certificate (in English of course), plus the French official translated one are currently in a stiff stapled envelope containing all the documents that will be gone through when I go (alone now) for my French citizenship interview on the 7th December. There’s a piece of paper in large forbidding font saying “Envelope must remain unopened until the interview”. So how will I get the death certificate? Perhaps I wait till Sunday and see if France does a Frexit making my desire to become a French citizen somewhat redundant. Or perhaps the lovely people at the death certificate office will have ways and means. I shall let them open the staples anyway and video them doing so.

When I opened up Mike’s phone before calling to get it cancelled, I found a heart-breakingly beautiful text to him from Ben, sent late on the day Mike died, soon after I had told Ben the news (he’d been playing in a concert). It said simply, “Goodbye – I love you”. 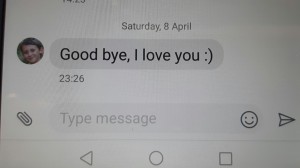 So sweet, poignant, sad. I didn’t want to lose the text so took a photo of the phone screen.

I can’t do a Pause for Thought on this post.  So here’s an alternative.

I am thinking of compiling a “Top Tips” list for people who – somewhat foolishly – choose to hang out with someone who’s recently bereaved. They seem to be “Don’t’s” rather than “Dos”. Current “don’ts” include: 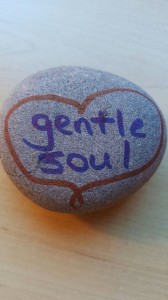 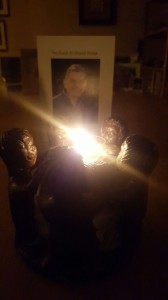 The Dos are few and far between. But they are there.